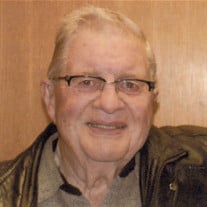 At peace and secure in his faith, Albert Lewis McDonald passed peacefully away July 3, 2019 at the age of 87 in the comfort of his home. Al was born November 8, 1931 to George Ernest and Florence E. (Moore) McDonald in Pellston, MI. He moved with his family to Newberry, MI at the age of 5 and then to Charlotte, MI at 10. Al graduated from Charlotte High School in 1950. He was the sole survivor of eight brothers and sisters; Earl Ford, Ilah, Donald, George, Lois, Robert and David. He was an accomplished musician and athlete and was a trumpet player who idolized Harry James. He was a Golden Gloves participant from 1948 to '49. Al received a full musical scholarship to Albion College and a full football scholarship to Alma College. After receiving his draft notice, he left these opportunities behind to join the Air Force where he served at Kelly, Lackland and Brooks AF bases in Texas from 1952 to '56 during the Korean Conflict as a Dispatcher. Al's career with General Motors spanned 49 ¾ years. He was a Journeyman Metal Model Maker serving on many of GM's special project vehicles over the span of his career. Al married his sweetheart Marsha E. Kesler (Smith) on June 16, 1972 at Mt. Hope United Methodist Church in the presence of their children, Perry, Kurt, Sidney and Kristi. They had a wonderful life together. They traveled extensively with their children and grandchildren. Al was fortunate to have been involved with four generations of children, his sons and daughter, his nieces and nephews, his grandchildren and his great-grandchildren. Camping and motorcycles were the center of the family's activities for most of his life and he probably built over a thousand campfires. Al and Marsha made many winter trips to Florida after Al's retirement in 1999. Especially dear is Navarre Beach Campground and the many friends they made there. Al was a member of Lawrence Avenue United Methodist Church where he enjoyed working in the kitchen. He mentored many children through the GM program with Lansing Public Schools and also Kids Hope USA through his church. He was also a Meals on Wheels volunteer for many years. Al was a member of the American Legion Post 42. Al is survived by his wife of 47 years, Marsha and many generations of family members and friends. Al was a true gentleman, and was a kind caring and patient person. He always had a cheerful, positive outlook on life, and always had the time for a chat and had a smile for everyone. His biggest joys in life were his loved ones, especially the children in his life and spending quality time with them was most important. They will always have happy memories of Grampa/Uncle Al/Bepaw. Semper Fi My Love. Friends are encouraged to support Al's family. Memorial services are Saturday, July 13, 2019 at 1:00 p.m. at Pray Funeral Home in Charlotte with Rev. Sarah Hurlbert officiating. Visitation will be held for one hour prior to the service. If desired, the family suggests memorial contributions to Helping Hands Charlotte or Siren Eaton Shelter. Friends and family are encouraged to share memories of Al on his Tribute Page at www.PrayFuneral.com. The family is in the care of Pray Funeral Home, Charlotte.

At peace and secure in his faith, Albert Lewis McDonald passed peacefully away July 3, 2019 at the age of 87 in the comfort of his home. Al was born November 8, 1931 to George Ernest and Florence E. (Moore) McDonald in Pellston, MI. He moved... View Obituary & Service Information

The family of Albert McDonald created this Life Tributes page to make it easy to share your memories.

At peace and secure in his faith, Albert Lewis McDonald passed...

Send flowers to the McDonald family.