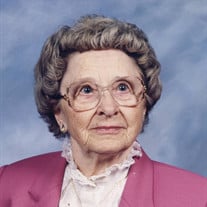 Alice Rose Blodgett, 94, of Charlotte, MI, died peacefully on Thursday, February 4, 2016 in Charlotte. Alice was born June 3, 1921, near Charlotte, the daughter of Floid and Grace (Ervay) Blodgett. She grew up on the family farm as the youngest of six children. Alice attended a one room country school house through 8th grade, and went to Sunday school at the age of 11, accepting Christ has her Savior at the age of 13. She was the first of her siblings to attend High School, and graduated before returning home. Two years later, she helped at the birth of her first nephew, an experience that instilled in her a spark to become a nurse. Alice joined the U.S. Cadet Nurse Corps in the war years of 1944 and trained at Wayne State University, graduating from Community Hospital in 1947. She returned to Charlotte briefly before moving to Kalamazoo, where she joined the staff at Bronson Hospital. After two years there as assistant supervisor of obstetrics, she felt a calling to consider the urgent need for a nurse on the African mission field. Alice would spend a total of 12 years in the mission field at the dispensary hospital at Mattru in Sierra Leone, West Africa. During this time, she returned twice to the U.S., enrolling at Fort Wayne Bible College during her second furlough and earning her B.S. in Missionary Nursing in 1961. After her return from Africa, she worked at Fort Wayne Bible College as College Nurse for 6 years. She then returned to Charlotte in 1974, where she worked over 10 years at Hayes Green Beach Hospital, retiring in 1986. She was a very faithful member of the United Brethren in Christ Church in Charlotte, where she demonstrated to others the importance of keeping Christ at the center of life. Alice is survived by her many nieces and nephews. She was predeceased by her parents and her 5 brothers and sisters. Funeral services will be at 2:00 p.m. on Monday, February 8, 2016 with Rev. Michael Arnold officiating at Pray Funeral Home, Charlotte. Visitation will be from 6:00 - 8:00 p.m. on Sunday, February 7, 2016 at the funeral home. If desired, the family suggests memorial contributions to Eaton Community Palliative Care or Crossroads United Brethren Church, Charlotte. Friends and family are encouraged to share memories of Alice on her tribute page at www.prayfuneral.com. The family is in the care of Pray Funeral Home.

Alice Rose Blodgett, 94, of Charlotte, MI, died peacefully on Thursday, February 4, 2016 in Charlotte. Alice was born June 3, 1921, near Charlotte, the daughter of Floid and Grace (Ervay) Blodgett. She grew up on the family farm as the youngest... View Obituary & Service Information

The family of Alice Rose Blodgett created this Life Tributes page to make it easy to share your memories.

Send flowers to the Blodgett family.