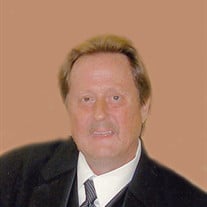 Barry Kurt Janetzke, a hard-working handy man, died on November 28, 2019 at the age of 67. Barry was born to Reinhold and Mary Lou (Jolliff) Janetzke in Lansing, Michigan on July 9, 1952. On June 6, 1980, Barry married his love, Tammy (Durbin) Janetzke. He earned his degree in skilled trades and was proud of the awards that he earned during his time spent as a laser operator at General Motors. Barry was known for being precise and thorough in his work, which is a skill that he passed on to his children. Always frugal, Barry did his research on items before purchasing them, and preferred American made products. A big kid at heart, Rock and Roll lover, Barry, prioritized spending time with his family. He was a super dad who had fun camping, swimming at Lake Michigan and enjoying the sand dunes. Barry is survived by his wife, Tammy; their children, Jamison Janetzke, Aaron (Mandy) Janetzke, Travis (Dawn) Heinze, Michael (Christina) Janetzke, and Regan Janetzke; grandchildren, Tara, Alex, Lauren, Devin, Logan and Brayden; granddog, Sophia; mother, Mary Lou Janetzke; siblings, Rev. Doug (Marguerite) Janetzke, Randy (Sue) Janetzke, Phillip Janetzke, Shari (Terry) Roe; and sister-in-law, Debbie Parish. Barry was preceded in death by his father, Reinhold Janetzke; and daughter-in-law, Stefanie Janetzke. Friends and family will celebrate Barry’s life on Saturday, December 14, 2019 from 3-5:00 p.m. at Sycamore Creek Church in Potterville. If desired, the family suggests memorial contributions to Kennedy's Disease Association or Cure SMA. Friends and family are encouraged to share memories of Barry on his Tribute Page at www.PrayFuneral.com. The family is in the care of Pray Funeral Home, Charlotte.

The family of Barry Kurt Janetzke created this Life Tributes page to make it easy to share your memories.

Send flowers to the Janetzke family.