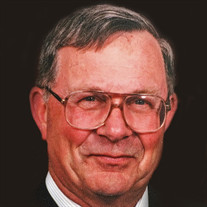 Dr. Bernard Robert Tennes, 81, of Charlotte, died peacefully surrounded by his family on Sunday morning, August 25, 2019. Bernie was born November 15, 1937 in Mt. Carmel, IL, the son of Martin Simon and Katherine Marie (Kieffer) Tennes. Growing up in rural southern Illinois on a farm, he was the 9th of 10 kids born to descendants of German immigrants and the first in his family to attend college after serving in the Army. Earning his bachelor’s degree at the University of Illinois he met his wife Ann Stalls. While raising his children and working for the US Department of Agriculture he earned his masters and doctorate degrees in Agricultural Engineering from Michigan State University. He went on to create several patented agricultural inventions involving mechanization and robotics that are still used to this day. In 1970, Bernie and Ann sold their East Lansing home to move to an 80-acre apple orchard & cider mill, The Country Mill. After losing his wife Ann of 33 years, Bernie was blessed to meet and marry, Beverly Callaghan Tennes. Bernie has enjoyed the past twenty years of life with his wife, Beverly. She has faithfully cared for him. Bernie was known for teaching his children and co-workers the value of hard work. He is preceded in death by his parents, and siblings Simon, Marie, Norman, Clair, Loretta, Florence, Irene and Leroy. Also, he is preceded in death by his granddaughter, Katie Tennes and his first wife, Ann. Bernie is survived by: his son; Michael (Diana) Tennes and their children Rebecca, Elizabeth, Ryan, Anna and John Tennes; his daughter; Toni, formerly “Eunice” (Casey) Gragg and their children Sophia, Cameron, Carl, Sacha and Capra Gragg; his son; Chris (Kira) Tennes; their children Luke, Nick and Grace Tennes, and his son; Steve (Bridget) Tennes and their children Brianna, Mary, James, Joseph, Faith and Aaron. He is also survived by his wife of 20 years Beverly Callaghan Tennes and her son, Doug (Diamantina) Callaghan, grandson Dennis Callaghan and daughter, Cheryl (Lewis) Jones and granddaughter Dr. Amanda Jones. A Funeral Mass will be celebrated at 11:00 a.m. on Thursday, August 29, 2019 at St. Mary Catholic Church with Rev. Fr. Dwight Ezop officiating. A Rosary will be prayed at 5:30 p.m. on Wednesday, August 28, 2019 at Pray Funeral Home, with visitation from 1:00-3:00 and 6:00 – 8:00 p.m., also on Wednesday. Bernie was passionate about engineering, in lieu of flowers please send memorial contributions to St. Mary School Robotics Club, 905 Saint Mary’s Blvd, Charlotte, Michigan 48813. Friends and family are asked to share memories of Bernie on his Tribute Page at www.PrayFuneral.com. The family is in the care of Pray Funeral Home, Charlotte.

The family of Bernard R. Tennes created this Life Tributes page to make it easy to share your memories.

Send flowers to the Tennes family.