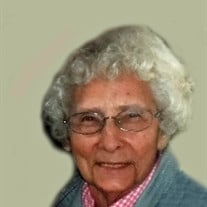 Bernice "Bernie" Irene Eaton, 88, of Vermontville, MI, the woman known for her wild finger nail polish, completed her legacy on Monday, March 18, 2019. Bernice was born in St. Johns, MI on August 27, 1930, the daughter of Amos and Edna (Schneider) Mull. Following graduation from Charlotte High School in 1949 Bernie began her working career at a curtain factory in Grand Rapids, followed by Wilcox Gay, Michigan Magnetics and Carefree working on the line and later as a janitor. After retiring from Carefree, Bernie worked at McDonalds in Potterville. She was dedicated to her work and received numerous awards for her perfect attendance. Bernie married Keith Eaton on May 27, 1950 and together spent the next 30 years together until his passing in 1980. Traveling was a big passion for Bernie, she traveled all across the world and her favorite destination was Hawaii. Bernie also enjoyed fishing, on the pier in Ludington was her favorite spot. She lived next to the Kalamo Hillside Cemetery and would take daily walks around the cemetery. During the summer she would take lemonade to the maintenance men at the cemetery. Bernie made numerous trips each day to her "favorite" places. These places were Taco Bell, Burger King and also Admiral gas station where she would put $5.00 of gas into her car each day. Bernice is survived by her loving family, daughter, Jackie (Terry) Yesh of Bellevue; 3 grandchildren; 6 great-grandchildren; brother, Ronald (Joyce) Mull of Belton, MO. Bernice was preceded in death by her husband, Keith; parents; brother, James Mull; and her significant other, Robert Wyble. A private family graveside service will be held at Kalamo Hillside Cemetery. If desired, the family suggests memorial contributions to Michigan Children with Special Needs Fund. Friends and family are encouraged to share memories of Bernie on her Tribute Page at www.PrayFuneral.com. The family is in the care of Pray Funeral Home, Charlotte.

The family of Bernice 'Bernie' Irene Eaton created this Life Tributes page to make it easy to share your memories.

Send flowers to the Eaton family.