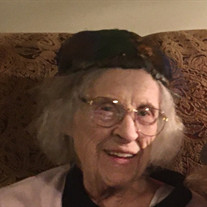 Betty Lou (Snider) Bergeon was born in Flint, Michigan, on November 2, 1931 to Rolland and Lillian Snider. She was third of six children: Audrey, Ray, Betty, Clayton, Lyle, and Louise. The kids were raised to be hard-workers, all helping on the family farm. They worked alongside their parents milking cows, feeding pigs, and doing field work in Clare, Michigan, then they moved to the farm on Columbia Road in Mason, Michigan in 1942. They worked hard together and played hard together. The Snider house was full of loud noise, laughter, card playing, and year-round fishing. At the age of 14, Betty had her first job away from the farm, in town at the local bakery. She mixed, cooked, frosted, and ate lots of doughnuts. Betty graduated from Mason High School in 1951, and started work at Dart National Bank as a teller until 1954. From 1955-1966 she was a full-time home maker, then returned to Dart Bank to work from 1967-1972. Then Betty worked 15 years for Michigan National Bank as a customer service representative. In 1998, Betty Bergeon was federally certified as the airport manager of Bergeon Airfield in Mason Michigan, with her son-in-law, David Groh, helping her study for the test. Betty Lou Snider and John Donald Bergeon were married January 30, 1954. Together they raised their 5 children, grew acres of pumpkins, 5 acres of strawberries, 2 acres of vegetables, re-built a 130-year-old farm house, flew hot air balloons, built and certified Bergeon Air Field, collected World War II equipment, and hosted many parties, family reunions, and get togethers in the airplane hangars. At Christmas they would hang thousands of lights outside and give away hundreds of all kinds of cookies. They enjoyed family, friends, and life to its fullest. Fishing was Betty's passion, and the reason why her family gave her the nickname Betty Bass. If she could get a line in the water, she was happy. Her family would go to the lake house near Rodney and at Grandpa Snider's gravel pit and catch pan fish including croppy, bluegill, sunfish, bass, and perch. Some of Betty's fondest memories were flying to Canada on an inland lake to fish when she was on crutches, and an ocean fishing excursion where she landed a blue fin tuna. Betty fought the tuna for several hours, her arms were on fire, but she never gave up until the huge fish was in the boat. Betty worked with the St. James Catholic Church altar society. Having four daughters, Betty was a Girl Scout Leader for 17 years, planning and leading numerous camping trips, as well as many other activities. Helping each of her girls earn all their badges, she had sore fingers from sewing on badges. Also, an avid sewer and quilter, she was a long-time member of the capitol quilters guild and member of quilt clubs. The Lord called Betty home the morning of August 14, 2021. A graveside service was held for the family. Betty was buried alongside her beloved husband, John, at Greenwood Cemetery in Mason, Michigan. John preceded her in death March 7, 1997, after 43 years of marriage. Betty is survived by her five children, Debbie (Dave) Groh, Denise (Jim) Droscha, Rolland Bergeon, Dawn (Paul) Edenfield, and Diane (Harold Bailey) Bergeon; grandkids, Helise (Chris) Long, Jeremy (Jessica) Droscha, Katie (Andrew Rodgers) Droscha, Sarah (Dustin) Osborne, and Rolland Jay (Heather) Bergeon; 7 great-grandkids, Ben and Natalie Long, Mason, Hannah, and Aubrey Droscha, and Charlotte and Luka Osborne; sister, Louise Barnhill; in-laws, Tom and Mickey Bergeon, and Nancy and Clair Bouts. Betty was preceded in death by her husband of 43-years, John; her parents; sister, Audrey Starr; brothers, Clayton, Lyle, and Ray Snider; her mother-in-law and father-in-law Mary and John C. Burgeon; and in-laws, Sue and Bill Parsons, and Dr. Milton and Marge Bergeon, Merritt Barnhill. The family suggests memorial contributions be made in Betty's name to First Baptist Church, 1110 S. Cochran Ave, Charlotte, MI, 48813. The family is in the care of Pray Funeral Home.

Betty Lou (Snider) Bergeon was born in Flint, Michigan, on November 2, 1931 to Rolland and Lillian Snider. She was third of six children: Audrey, Ray, Betty, Clayton, Lyle, and Louise. The kids were raised to be hard-workers, all helping on... View Obituary & Service Information

The family of Betty Lou Bergeon created this Life Tributes page to make it easy to share your memories.

Send flowers to the Bergeon family.