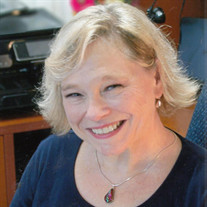 Billie Kops Wimmer, 63, of Charlotte, an uncommonly beautiful and loving wife to her husband and a caring, supportive and unconditionally loving mother to her three children, died Sunday, August 25, 2019 in Lansing. Billie was born February 9, 1956 in Detroit, the daughter of Herman Joseph and Stella Joan (Goodrich) Kops. She grew up in the Grand Rapids area, where she graduated from Marywood Academy. Following high school, she pursued her interest in politics. While attending a Republican Convention on Mackinac Island, she met Joe Wimmer. The two fell in love and were married 2 years later on July 10, 1976. She earned her degree in Political Science from Michigan State University in 1981 (GO GREEN!) before launching an extensive career in government and nonprofit organizations. She worked to develop the Michigan Nonpublic School Accrediting Association in Lansing, serving as Executive Secretary, followed by being the first Executive Director of the Michigan Association of Non-public Schools. Billie served on US Senator Spencer Abraham’s staff, as both Deputy State Director and State Director. Following politics, she worked briefly with the Michigan Economic Development Corporation, served as Executive Director of the Education Freedom Fund in Grand Rapids, Executive Director for the Michigan Council of Charter School Authorizers, and, most recently, as Chief Executive Officer of the Association for Child Development for both Michigan and Illinois. Throughout her career, she received countless appointments and honors, including the Ivan E. Zylstra Award from the Michigan Association of Public Schools, Christa McAuliffe Fellowship Program Selection Committee, Leadership in Educational Administration Grant Project Advisory Committee, State Board of Education Legislation Law Committee and Chapter 1 Committee of Practitioners, Chair of the State Board of Education Transportation Advisory Committee, National Advisory Panel for the Center for Learning and Teaching of Elementary Subjects, Board of Directors for the Council of American Private Education, Chair of the Michigan Nonpublic School Coalition, Fellow in the Institute for Educational Leadership and Education Policy Fellowship Program, Michigan International Year of the Family Steering Committee, Governor’s Advisory Committee, Co-Chair of the Patient and Family Advisory Board at the University of Michigan Comprehensive Cancer Center, Board Member of Holy Name of Jesus School in Wyoming, MI, the Distinguished Alumni Award from Marywood Academy in 1987, and was on the Parish Council at S. Michael’s in Grand Ledge. As busy as Billie’s professional life was, she always made time to be there alongside her children in their adventures. Her family was most important in her life, far above her many accomplishments. She lived a life focused on the wellbeing of those around her. She saw the positive in any situation and the good in any person she met along the way. Billie’s 26 year journey through cancer treatments, including two battles with breast cancer and a five year battle with multiple myeloma, inspired her to reach out to others battling the disease. She served as a beacon of support, showing others facing cancer that there would always be hope. Many will remember Billie as a perpetually positive person who brought so much joy everywhere she went. Her smile never faded, even to the end. Billie is survived by her loving husband of 43 years, Joseph Wimmer; sons, William and Daniel (Jessica Ackerson) Wimmer; daughter, Maris Wimmer; extended grandchildren, Devin and Trent Ackerson, Rylie Fisher, Jackson and Sadie Lake; half-sister, Barbara Tawney; nieces, Mary Bonevelle, Andrea (Hans Weinberger) Bonevelle, Jillian (Matt) Bigelow, Maddie Wimmer, Elise Weinburger, and Emmerson Bigelow; nephews, Nick Bonevelle (Zack Mittenzwei), Bradley (Tracy) Wimmer, Gavin Weinburger, and Beckett Bigelow; sister, Pamela (Mike) Bonevelle; and brother-in-law, Dale (Laurie) Wimmer. She is predeceased by her parents. Friends are encouraged to support Billie’s family at visitation and funeral services. A Funeral Mass will be celebrated at 11:00 a.m. on Friday, August 30, 2019 at St. Michael Catholic Church in Grand Ledge with Rev. Fr. James Eisele officiating.Visitation will be held at the church beginning at 10:00 a.m. Visitation will be from 2:00 – 4:00 and 6:00 – 8:30 p.m. on Thursday, August 29, followed by a Rosary at 8:30 p.m. at Pray Funeral Home in Charlotte. Visitation will also he held at St. Michael Catholic Church in Grand Ledge from 10 a.m. to 11 a.m. on Friday, August 30, 2019. If desired, the family suggests memorial contributions to the Association for Child Development Michigan or Illinois. Friends and family are asked to share memories of Billie on her Tribute Page at www.PrayFuneral.com. The family is in the care of Pray Funeral Home, Charlotte.

Billie Kops Wimmer, 63, of Charlotte, an uncommonly beautiful and loving wife to her husband and a caring, supportive and unconditionally loving mother to her three children, died Sunday, August 25, 2019 in Lansing. Billie was born February... View Obituary & Service Information

The family of Billie Kops Wimmer created this Life Tributes page to make it easy to share your memories.

Send flowers to the Wimmer family.