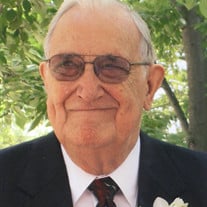 Bruce Mac Bryan, a loving and devoted, husband, father, grandfather, and great-grandfather died January 16, 2020. Bruce, 90, was born June 23, 1929 in Charlotte, MI, to Rex and Cecil (Hawley) Bryan. Following graduation from Charlotte High School in 1948, Bruce met Shirley Ann Parr and on July 9, 1950 they married and started their family together. Bruce lost his sweetheart of 64 years in 2015. He worked throughout his life, starting as a grocery stock boy at the Charlotte Kroger store, and later becoming an electrician, working for the IBEW local 65 including a time with his own company, Maple City Electric. Bruce was the ultimate handyman, he built three of the family homes and also a fishing cabin. There was no project that he couldn’t handle. Bruce joined the Charlotte Masonic Lodge #120 Free & Accepted Masons in 1962, serving as Past Master in 1969. He went into the Saladin Shrine Temple Grand Rapids in 1973. He could be seen in many in local parades riding on his Mini 50 Shriner bike. He also served on the Charlotte Board of Education from 1960 to 1971. When Bruce was not serving his community he enjoyed hunting, fishing, golf and bowling. Bruce is survived by his daughters, Diane (Larry) Bass, Patricia (James) Bueter; grandchildren, Michael (Connie) Betts, Lisa (Jeff) Callaghan-Keefer, Nicholas (Megan) Bueter, and Joseph (Heather) Bueter; great-grandchildren, Hannah, Thomas, Emma, Elliett, Jackson, Benjamin, Jane; and sister-in-law, Shirley Bryan. Bruce was preceded in death by his beloved wife, Shirley; siblings, Ruth Grier, Dan Bryan, Beryl Wilkerson, Ned Bryan, Doris Byrnes, and Joan Bryan. Family and friends are invited to participate in a Family Affirmation Service on Monday, January 20, 2020, 11:00 AM at Pray Funeral Home in Charlotte. Visitation is Sunday, January 19, 2-4:00 PM and 6-8:00 PM. If desired, the family suggests memorial contributions to Shriner's Hospitals for Children - Chicago. Friends and family are encouraged to share memories of Bruce on his Tribute Page at www.PrayFuneral.com. The family is in the care of Pray Funeral Home, Charlotte.

The family of Bruce Mac Bryan created this Life Tributes page to make it easy to share your memories.

Send flowers to the Bryan family.