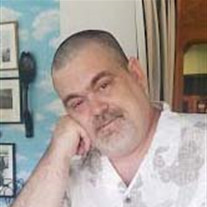 Bryan Cormac Bales, 50, of Charlotte Michigan went to be with the Lord on September 26, 2021. Bryan was born May 7, 1971 in Knoxville, Tennessee, the son of Robert C. and Irene G (Reed) Bales. He spent most of his childhood in Corbin, Kentucky before moving to Jacksonville, Florida. After High School Bryan married, enlisted into the Navy, and served his country in Operation Desert Storm. Like many other of his brothers-in-arms, Bryan came home from war ready to live the American dream but instead found himself on a new battlefield of Alcoholism, undiagnosed post-traumatic stress disorder and generalized anxiety disorder. He spent his twenties working, playing guitar in various bands, learning every detail about computers and trying to be a good husband and father. But, his self-medicating with alcohol cost him his marriages and his ability to be the father his older children deserved. Bryan’s love of computers grew to include computer games. While playing an online fantasy based MMORPG called Everquest, he met his current wife, the leader of his in game-guild. They were in game friends for two years when love bloomed and she moved to Jacksonville so they could be together. Bryan was determined to not lose another wife and child to his drinking and worked hard to quit and better himself for his new family. Once he no longer was drinking, the illness that the drinking hid became apparent. This led to Bryan’s finally seeking treatment for his mental illness. He would have good days and many bad days, followed by hospitalizations and medicine adjustments, all in the hope of improving his mental health and taking away his mental anguish. It would take a move from Jacksonville to his wife’s home state of Michigan for his medications to finally get adjusted well enough that he no longer had moments where he suffered so greatly he would wish for death. Proper treatment allowed Bryan to find healing and serenity camping with his wife and child at Camp Deer Trails when it was a Girl Scout family camp. He looked forward to the weekends spent in Ma’s Cabin overlooking Long Lake. He was always happiest when he had his family close in a calm quiet place. He began playing his guitars again, teaching himself to play classic rock and classic country songs. He began playing Everquest again with his wife and her siblings and began to pass his love of computers on to his child. The camping stopped when Bryan became too sick due to a diagnosis of Goodpasture syndrome. In his final years he finally got diagnosed with the post-traumatic stress disorder, he endured three rounds of chemotherapy in an attempt to send his Goodpasture into remission. But even as his body began to fail and he became disabled he tried to be the best version of himself he could be. In the end, even though he was vaccinated, he caught COVID which turned into pneumonia, and his weakened body just could no longer fight. Bryan is survived by his wife, Margaret; children, Tiffany Arps, Kristian Bales, Bryan (Corey) Bales, and Samantha Bales; father, Robert Bales; brothers, Shawn McDaniel, Matthew Bales, and Josh Lay; sister, Regina Lane; and several nieces and nephews. He was preceded in death by his beloved Mother, Irene Reed; grand-aunt, Ethel Ammons; nephew, Alexander Lane; and niece, Jessica Lane. Funeral Services will be held at 1:00 p.m. on Tuesday, October 5, 2021 in Pray Funeral Home Gardens. Visitation will be from 5:00 – 7:00 p.m. on Monday, October 4, 2021 in Pray Funeral Home Gardens. Memorial Contributions may be made to any Veteran’s Association of choice or the Girl Scouts of American Heart of Michigan, https://www.gshom.org/en/Donate/Memorials_and_Tributes.html. Friends are encouraged to support Bryan’s family by sharing memories on his Tribute Page at www.prayfuneral.com. The family is in the care of Pray Funeral Home, Charlotte.

Bryan Cormac Bales, 50, of Charlotte Michigan went to be with the Lord on September 26, 2021. Bryan was born May 7, 1971 in Knoxville, Tennessee, the son of Robert C. and Irene G (Reed) Bales. He spent most of his childhood in Corbin, Kentucky... View Obituary & Service Information

The family of Bryan Cormac Bales created this Life Tributes page to make it easy to share your memories.

Bryan Cormac Bales, 50, of Charlotte Michigan went to be with...

Send flowers to the Bales family.