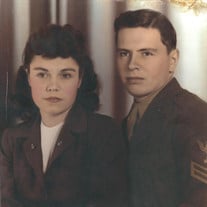 Cash J. "Bud" Beechler died January 31, 2017 and his wife, Rosemary died the following year, on December 5, 2018. Rosemary was born on February 6, 1923 to Ralph and Bernice Parkhurst in their residence on Cochran Avenue in Charlotte, Michigan. Cash was born to Cassius and Ethel Beechler in St. Johns, Michigan on July 13, 1923. Cash and Rosemary grew up and attended Charlotte schools, and were high school sweethearts. Cash attended Albion College on a football scholarship until 1944 when he enlisted in the military for WWII. He served in the Marine Corps in the Pacific Theater of operations. Cash was part of the 3rd Marine Division and was involved with operations on Guam and the assault on Iwo Jima. He was awarded a Purple Heart for wounds received on Iwo Jima. Their 73 years of marriage was an adventure beginning when they married in Long Beach, California in 1943. Cash shipped out to the war in the South Pacific soon after in 1944. Upon Cash's return from the war he joined his father in the family theater business in Charlotte, operating the Eaton and B Theaters and later adding the Maple City Drive-In. The Beechlers were members of the Methodist church where she was a soloist in the choir in the early 1950s'. The family moved to Sylvania, Ohio until Cash's retirement from General Aluminum Corp. in 1979 as Vice-President of Sales and Marketing. Shortly after his retirement Cash and Rosemary moved to Gainesville, Florida where he and his son, Chris, started Big Red Q Printing. That company grew to become Beechler's Printing, Inc. Cash retired from the printing business in 1984. Cash was closely associated with the Gator Men's and Women's Golf Teams from 1985 to 2000, as a master golf club craftsman doing repairs and adjustments for the team's players. He closely followed many of his 'kids' as they continued their careers in the PGA and LPGA making many trips to golf tournaments throughout the South. Cash and Rosemary are survived by their sons, Cash R. (Susanne) of Scottsdale, AZ, Chris D. (Suzanne) of Winston-Salem, NC and Gary J. (Angie) of Indianapolis, IN; 7 grandchildren; and 10 great-grandchildren. A graveside service will be held on Saturday, June 22, 2019, 11:00 AM at Maple Hill Cemetery in Charlotte. Friends and family are encouraged to share memories of Cash and Rosemary on their Tribute Page at www.PrayFuneral.com. The family is in the care of Pray Funeral Home, Charlotte.

Cash J. "Bud" Beechler died January 31, 2017 and his wife, Rosemary died the following year, on December 5, 2018. Rosemary was born on February 6, 1923 to Ralph and Bernice Parkhurst in their residence on Cochran Avenue in Charlotte, Michigan.... View Obituary & Service Information

The family of Cash and Rosemary Beechler created this Life Tributes page to make it easy to share your memories.

Send flowers to the Beechler family.