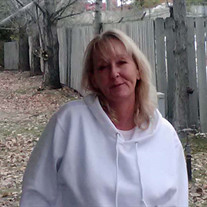 Catherine "Cathie" Thekla Conroy, a happy-go-lucky kind of lady, died February10, 2021, just 5 days before her 61st birthday. Cathie was born in Wurzburg, Germany on February 15, 1960 to William and Berta (Stadler) Smith. Growing up in Germany, Cathie's parents dreamed of moving to the United States, so her father who was enlisted in the U.S. armed forces, moved the family to the United States, which they did when Cathie was 5. At a very young age Cathie earned her U.S. Certificate of Naturalization. Known for her big heart, Cathie was caring, friendly, easy-going, and accepting to everyone. She worked at the Irish Pub in Lansing for 6 years, Spartan Motors for 2 years, and was a food service manager at Fire Keepers casino for 10 years. Cathie really enjoyed her jobs in customer service, and had the best bar story about how she met her husband, Michael. In her free time Cathie enjoyed camping, canoeing, traveling around the United States, and especially spending time and doting on her grandchildren. Cathie is survived by her family, husband, Michael; daughter, Serena Willett; step-daughter, Jessica (Jeremy) DeRosia; grandchildren, Michael DeRosia, Neveah and Alilliana King; and Joshua Ellis Jr.; and her sister, Christina (Gary) Bitner; and nieces and nephews. She was preceded in death by her parents. Friends are encouraged to support Cathie's family by sharing memories of her on her Tribute Page at www.PrayFuneral.com. A memorial service will be held at a later date. If desired, the family suggests memorial contributions to SIREN/Eaton Shelter or Make-A-Wish Foundation. The family is in the care of Pray Funeral Home, Charlotte.

The family of Catherine ''Cathie'' Thekla Conroy created this Life Tributes page to make it easy to share your memories.

Send flowers to the Conroy family.