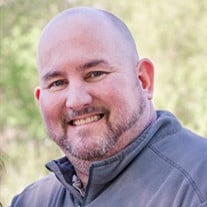 Chad “Ozzy” Alan Osborne, the best funcle (the fun uncle) and everybody’s friend, of Potterville died March 10, 2022. Chad, 48, was born March 17, 1973 in Lansing, MI to Charles and Karen (Pfister) Osborne. Chad was captain of his high school basketball and football teams at Potterville High School where he was a top 10 student, class of 1991. After high school, Chad served four years in the Navy on the USS Conolly in the engine room, and he was stationed in Norfolk, Virginia. During his time in the Navy he docked at Guantanamo Bay and also in Finland, Denmark, Djibouti and Egypt, among many other destinations. He was a journeyman plumber for Mark Woodman Plumbing. Spending time with his family and taking care of them was very important to Chad, you could often find him at the bowling alley with his nieces and nephews as it was one of his favorite things to do. He loved to play golf and relearned it after he suffered a stroke 3 years ago. Chad overcame so much in his life, having the tenacity and perseverance to overcome his stroke. He was extremely proud of that as well as his sobriety, and in January he celebrated 11 years. As an avid Spartan fan you could hear him yelling “Go Green!” and he loved March Madness. Chad is survived by his parents, Charles and Karen (Pfister) Osborne; siblings, Erika (Ralph) Reagan and Sara (Nic) Fowler; grandfather, James Pfister and his wife, Dorothy; grandmother, Mary Jean Osborne; nieces and nephews, Audrey, Mason, Max and Nora Reagan and Melanie, Keira and Shane Fowler; aunts and uncles, and many cousins. He was predeceased by grandfather, Richard A. Osborne; grandmother, Margaret Pfister; and aunt, Debbie Pfister. Friends and family are encouraged to support Chad’s family by sharing memories on his tribute page at www.prayfuneral.com There will be a Celebration of Life service at a later date this summer. The family is in the care of Pray Funeral Home, Charlotte, MI.

The family of Chad "Ozzy" Alan Osborne created this Life Tributes page to make it easy to share your memories.

Send flowers to the Osborne family.