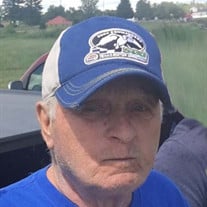 Charles “Chuck” H. Miller, a helper of people, died peacefully at home surrounded by his family in the early morning November 8th after a four year battle with health issues. Chuck was born August 7, 1939 in Manitowoc, WI to Cecil and Ruth (Tomaschefsky) Miller. He served in the U.S. Marine Corp from 1956 to 1958 and then continued his service to his country in the National Guard from 1973 to 1981. Chuck was one of those generous people who cheerfully gave his time and his talent to others. Many will remember Chuck from his countless hours that he spent at the Potterville Sod Slingers race track where he manicured the grass to make sure the Lawn Mower races could proceed each weekend during the season. Chuck loved the outdoors, and especially enjoyed the many years at Deer Camp in Michigan’s Upper Peninsula with his buddy Jim Ness, his nephews, his son Bob, and son in-law Patrick. Chuck was also a fan of family and friends gathering for chili cookout parties in the backyard of the family home. Above all he was loved by everyone he met. He will be remembered for his quick wit and memorable one-liners he would share with a smile. His favorite one being “Don’t tell me what to do.” Chuck is survived by his loving wife, Jackie; their children, Teri (Patrick) Daniels, Bob Miller, Greg Miller and John (Dena) Miller. He also leaves behind his 14 cherished grandchildren including the youngest being born on June 30, 2020, and was named Charlie Benjamin after his grandfather; as well his sister, June Ely; brother, Richard Miller; and many nieces and nephews. He was preceded in death by his mother, Ruth Miller; his father, Cecil Miller; granddaughter, Kayla Daniels; brother, David Miller; and special brother-in-law, Jim Ness. Friends are encouraged to support Chuck’s family at a Chili cookout and memorial service at the family residence Saturday November 14, at 2:00 PM. Friends and family are encouraged to share memories of Chuck on his Tribute Page at www.PrayFuneral.com. The family is in the care of Pray Funeral Home, Charlotte.

Charles &#8220;Chuck&#8221; H. Miller, a helper of people, died peacefully at home surrounded by his family in the early morning November 8th after a four year battle with health issues. Chuck was born August 7, 1939 in Manitowoc, WI to Cecil... View Obituary & Service Information

The family of Charles 'Chuck' H. Miller created this Life Tributes page to make it easy to share your memories.

Send flowers to the Miller family.