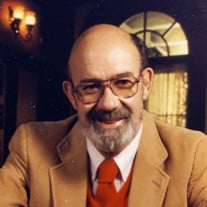 Charles "Butch" Rutter, a man who lived a full-life even after the doctors gave him an early expiration date, died December 1, 2019 at the age of 85. Butch was born September 15, 1934 in Logan, Ohio to Valley and Estella (Wright) Rutter. He married Marilyn Sumerix in the summer of 1957, and they moved to Olivet where they raised their family. In the 1970's Butch had a terminal cancer diagnosis, and doctors told him that he wouldn't live to see his 25th anniversary with his wife, but he proved them wrong and lived a long and happy life with his beloved Marilyn. Butch enjoyed his church and served as a Trustee and a youth leader at the Brookfield Church. He enjoyed working with children and was a 4H leader with The Walton Wonders 4H Club. A very dedicated employee, Butch worked many years for the Calhoun County Juvenile Home as a childcare worker until his retirement. Some of Butch's favorite activities included hunting, fishing (with trips to Canada as often as possible), watching the Detroit Tigers play baseball, and traveling around the United States. Since 2005, Butch and Marilyn enjoyed winters in Ft. Myers, Florida. Butch is survived by his wife of 62 year, Marilyn; children, Jacquelynn Rutter-Kwiatkowski, Jeffrey (Katie Collier) Rutter, and James Rutter; grandchildren, Katelyn and Stephanie Kwiatkowski and Alex Schneider. He was preceded in death by his brothers, Vance and Victor Rutter. Friends are encouraged to support Butch's family at visitation and funeral services. Funeral services are Monday, December 9, 1:00 PM at Pray Funeral Home in Charlotte with Rev. John Morse officiating. Visitation is Sunday, December 8, 2-4:00 PM and 7-9:00 PM at Pray Funeral Home. If desired, the family suggests memorial contributions to the American Cancer Society or Elara Caring Hospice. Friends and family are asked to share memories of Charles "Butch" on his Tribute Page at www.PrayFuneral.com. The family is in the care of Pray Funeral Home, Charlotte.

Charles "Butch" Rutter, a man who lived a full-life even after the doctors gave him an early expiration date, died December 1, 2019 at the age of 85. Butch was born September 15, 1934 in Logan, Ohio to Valley and Estella (Wright) Rutter. He... View Obituary & Service Information

The family of Charles 'Butch' Rutter created this Life Tributes page to make it easy to share your memories.

Charles &quot;Butch&quot; Rutter, a man who lived a full-life even after...

Send flowers to the Rutter family.