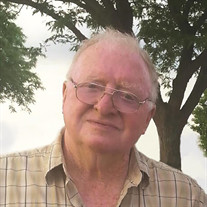 Clarence “Red” Arthur Humphrey, a man known for his saying “It only takes a minute to stay an hour,” died Tuesday, September 28, 2021. Red, 76, of Charlotte, was born November 14, 1944, in Alma, MI, the son of Arthur and Cora (Melton) Humphrey. After dropping out after the 8th grade, Red later went back and got his diploma in 1979. He continued to take classes in drafting and small engine repair at LCC. Red began his career at Johnson Refinery and later went to General Motors in 1965 where he worked 31 years as a die worker until his retirement in 1996. On July 1, 1962, Clarence married Julene Miller and together created their legacy until her passing in 2009. On May 19, 2012 Clarence married Sandy McQueen. Red was a man who loved everyone, he devoted his time to helping others, from volunteering at Chester Gospel Church, teaching cooking at the Crosswalk Teen Center, to helping in the Amish community, he could be counted on for assistance. He was the type of man that if you needed his shirt then it was yours. Red was a man that liked to stay busy, he was a jack of all trades, working as a Handyman for Joe Fix Rentals, and owned his own business CJ&T Produce. His hobbies included hunting, fishing, trips to the Tippy Dam, motorcycles, his Austin Healey Sports Car, blacksmithing, woodworking, yard sales and trying to find treasures for others, mud bogs, and most importantly sharing his life skills with others. Clarence is survived by his wife, Sandy; children, Pennie (Doug) Lake, Julia (Chris) Long, Clarence (Betty) Humphrey Jr., and Lorinda Gidner; grandchildren, Melissa Lake, Martyn (Cristy) Lake, Troy (Raquel) Copenhaver II, Victoria (Zach) Steinbacher, Dalton Humphrey, Lamour Humphrey, Maggie Humphrey, Marshall Humphrey, Craig Gidner, Gina Wilkes, and Erin (Sean) Barker; great-grandchildren, Kamryn and Mykenzie Lake, Cole Wilkes, Logan Barker and Conner Barker; step-children, Nicholas Truax and Christopher Truax; and his other sons, Bill (Julee) Emenhiser, and Michael (Penny) Halliwill; sister-in-law, Patricia Humphrey; and many nieces and nephews. He was predeceased by his first wife, Julene Humphrey; granddaughters, Angel Kay Humphrey, and Christina Lake; brothers, Marvin, Leon, and Bruce Humphrey; and his parents. Friends are encouraged to support Red’s family by attending services or sharing memories on his Tribute Page at www.prayfuneral.com. Visitation is Friday, October 1, 2021, from 2-4:00 p.m. and 6-8:00 p.m. at Pray Funeral Home. Funeral services are Saturday, October 2, 2021 at 2:00 p.m. at Pray Funeral Home in Charlotte with Pastors Dennis Weeks and Marc Livingston officiating. If desired, the family suggests memorial contributions to Crosswalk Teen Center or the Eaton County Agricultural Society (Eaton County Fairgrounds). The family is in the care of Pray Funeral Home, Charlotte.

The family of Clarence 'Red' Arthur Humphrey created this Life Tributes page to make it easy to share your memories.

Clarence “Red” Arthur Humphrey, a man known for his saying “It...

Send flowers to the Humphrey family.