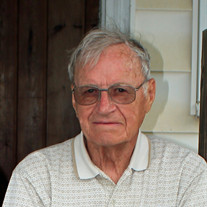 Clement Eugene Miner II, an inventor, farmer and family patriarch, passed away at his home in Owosso on Wednesday, May 1, 2019. Clement or "Bud," as his friends knew him, lived a full life of 97 years. Clement was born August 6, 1921 in Holly, MI, the son of Clement and Grace (Alger) Miner. Growing up in Holly, he worked in the local grocery store and played hockey on the ice of the numerous area lakes. During one particular game, he saved the life of a player who had broken through the ice. He graduated from Holly High in 1939. Following High School, he attended Ferris Institute, and graduated from Michigan State University. On December 1, 1944, Bud married Donis C Fletcher. He served as athletic instructor in the U.S. Navy from 1944 to 1946, keeping the troops in top shape. After serving his country, Bud worked as a Research and Development Chemist in abrasives and their associated adhesives. He worked for several companies, including Midwest Abrasives and Bendix Corporation. The family remembers him having a hand in developing materials such as superglue and bullet-proof plastic. Bud's working years also included farming 120 acres at their home in Owosso, where he raised livestock, including sheep and horses. In his limited spare time, Bud enjoyed woodworking, making numerous pieces to make home-life easier for family members. His meticulous attention to detail showed in all his projects. He was known to make his own hardware when he couldn't find the right screws or other pieces for one of these projects. During Bud's childhood the family spent many weekends gathered at a family cabin on Tipsico Lake. In his young adult years those trips included hunting and fishing with extended family. Later, he helped build a new family cabin in Paradise on Whitefish Bay, becoming an honorary Yooper. He framed and wired the cabin with his same attention to detail, drawing compliments from the local inspectors. He also designed and built numerous little touches to make the cabin easer to maintain through the years. Bud's mother's ancestors, the Algers, were one of the original founding families of Holly, originally known as Algerville. One of the family's favorite memories was an Alger family gathering in Holly a number of years ago. Bud was the self-appointed tour guide showing family members of all ages around the community and telling the stories of the early history of the town and his own recollections of the community during his childhood. Clement is survived by his son, Lynn (Caren) of Henderson; 2 grandsons, Matthew of Bancroft, and Aaron of Henderson; sister-in-law, Frances DeBar of San Diego; and several nieces and nephews. Bud was predeceased by his beloved wife, Donis; his parents; twin sisters, Mildred Collins and Maxine Howe; and his brother Stanton. Visitation for Clement "Bud" Miner will be 11:00 AM to 1:00 PM Monday, May 6, 2019 at Pray Funeral Home, Charlotte with the family processing to Gresham Cemetery for gravesides service at 1:00 PM. Memorial Contributions may be made to Shiawassee Council on Aging. Friends and family are encouraged to share memories of Bud on his Tribute Page at www.PrayFuneral.com. The family is in the care of Pray Funeral Home, Charlotte.

Clement Eugene Miner II, an inventor, farmer and family patriarch, passed away at his home in Owosso on Wednesday, May 1, 2019. Clement or "Bud," as his friends knew him, lived a full life of 97 years. Clement was born August 6, 1921 in Holly,... View Obituary & Service Information

The family of Clement Eugene Miner II created this Life Tributes page to make it easy to share your memories.

Send flowers to the Miner family.