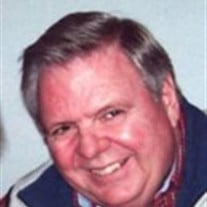 Craig Beachnaw, 69, of Cheboygan, passed away Monday, October 1, 2018 at home. A resident of Cheboygan since 2005, moving from Lansing, Craig was born June 18, 1949 in Cook County, Illinois, the son of Donald Beachnaw and Dona (Sutton) Twining. He was a graduate of Grand Ledge Public Schools, and later served in the U.S. Army during the Vietnam War, 1968-1971, as a Military Policeman. Craig worked as a financial consultant and planner, and owned and operated several businesses in Lansing, including Centennial Property and Causality, for over 30 years, retiring in 2005. He enjoyed spending time with his grandchildren and traveling, and was involved with Big Brothers and Big Sisters, the Wounded Warriors, and Honor Flights for Veterans. Surviving are his son, Evan Beachnaw of Phoenix, Arizona, his longtime companion, Mary P. Brown of Cheboygan and her children, Derrick (wife, Sara Ashbaugh) Brown, and Bridgette (husband, Jordan Hogue) Brown, his siblings, Holli Hamill of Eaton Rapids, and Kevin (Yvette) Beachnaw and Shaun (Joseph) Ancona, both of Charlotte, his stepchildren, Amy Kramp, Lydia Millbrook, and Melissa Perales, his aunt, Rosemary, and many nieces, nephews, and cousins. He was preceded in death by his parents, a sister, Kelli Beachnaw, a brother, Dennis Beachnaw, and a nephew, Lucas Beachnaw. A memorial service will be held on Saturday, October 27, 2018 at noon, with the family greeting friends beginning at 11:00am, at the Pray Funeral Home in Charlotte. Contributions may be made to the Wounded Warriors @www.woundedwarriorproject.org in Craig's honor. Online condolences may be made at www.stonefuneralhomeinc.com. The Nordman-Christian Funeral Home is caring for the family.

Craig Beachnaw, 69, of Cheboygan, passed away Monday, October 1, 2018 at home. A resident of Cheboygan since 2005, moving from Lansing, Craig was born June 18, 1949 in Cook County, Illinois, the son of Donald Beachnaw and Dona (Sutton) Twining.... View Obituary & Service Information

The family of Craig Steven Beachnaw created this Life Tributes page to make it easy to share your memories.

Send flowers to the Beachnaw family.