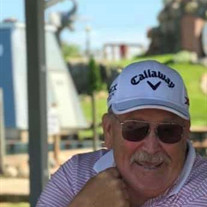 Daniel Allen Christie, a devoted husband, father, grandfather and brother, who liked to be in charge, died July 27, 2021. Dan, 65, was born January 18, 1956 in Pontiac, MI to Roger and Mary (Solomon) Christie. While attending West Shore Community College Dan met Connie Hoover who he later married on January 17, 1976 and together they started their family. Later in life Dan proudly earned a Bachelors Degree in Business from the University of Phoenix Online. He spent a majority of his life working construction, building and renovating countless homes/businesses around Charlotte and the entire state. Dan started Christie Construction that he owned and operated for 30 plus years, the last 10 years he has worked alongside his sons. He was a man who at times could be stubborn, but was also very reliable and always willing to help anyone in need. Dan was very involved in 4-H, Charlotte Cruiser Car Club, where he is a past president, Eaton County Mounted Division, CJO where he impacted the lives of young kids and Habitat for Humanity, he received recognition from State Representative Nick Smith for his dedication and work on the House That Congress Built Project in Charlotte. He was referred to by many as "Coach" from the kids that he coached in baseball, softball, and football. Dan was a man who loved working with his hands, from building houses, to restoring his 1976 Cutlass, and working on his boat. He also enjoyed trail riding when he owned horses, snowmobile, lawnmower and motorcycle rides around the yard with his kids and grandchildren, family cookouts, bonfires. Above all Dan loved his family and the memories they were able to create. Dan is survived by his loving family; wife, Connie; children, Jennifer Christie, Brandon Christie, Tyler (Seara) Christie, Kaitland Christie; 7 grandchildren; 5 nieces and nephews; siblings, Kerri Tomlinson, Enos "Butch" (Chris) Christie. He was predeceased by his parents; and sister, Kimberly Christie. If desired, the family suggests memorial contributions to Siren Eaton Shelter. Friends and family are encouraged to share memories of Dan on his Tribute Page at www.PrayFuneral.com. The family is in the care of Pray Funeral Home, Charlotte.

The family of Daniel Allen Christie created this Life Tributes page to make it easy to share your memories.

Send flowers to the Christie family.