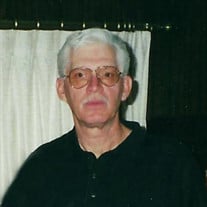 Daniel "Dutch" Ray DeBarr, a man known as a fun gentle giant, died Friday, July 2, 2021. Daniel, 74, of Charlotte was born on November 7, 1946 to Raymond and Betty (Miller) DeBarr in Lansing. Daniel was a graduate of Wavery High School. Daniel married Terri Eishen in 1987. He was a retired line worker at General Motors, as well as an overhead door installer, a painter, and a builder. Daniel was a member of the Western Michigan Brittany Club where he worked with Brittanys doing field trials throughout the United States. Daniel enjoyed ice fishing, hunting (deer and pheasant), yearly trips out West hunting, painting pictures, training Brittanys, his horse Sloan, eating pies and cookies, trips to Dairy Queen for sundaes, and a cold beer at the end of the day. Daniel enjoyed daily breakfasts at the Eaton Place with his wife Terri. His favorite pie was lemon meringue pie. Daniel enjoyed fixing things and he could fix anything. Daniel also enjoyed watching Western movies and news, particularly CNN. One of this favorite shows was Walker Texas Ranger. Daniel was very proud of his family, he was also proud of how he was able to provide for his family. He was a stern, yet calm and quiet man who was a big softy. He gave great advice, and when he talked, others listened. He enjoyed being at home. Daniel is survived by his wife of 34 years, Terri; two sons Daniel DeBarr Jr., and Clay DeBarr; daughter Teri (David) Jones; grandsons Jacob and Joshua; and one great-grandchild; brothers Stanley (Jane), Randy (Jackie), and Keith (Sue) DeBarr, and numerous nieces and nephews. He was predeceased by one brother, Richard, and his parents. Friends are encouraged to support Daniel's family by sharing memories on his Tribute Page at www.prayfuneral.com. The family is in the care of Pray Funeral Home, Charlotte.

The family of Daniel R DeBarr created this Life Tributes page to make it easy to share your memories.

Send flowers to the DeBarr family.