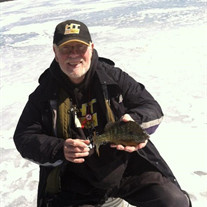 David Cline Young, 76, of Charlotte, a tight-line ice fishing man of the outdoors, died Thursday, December 30, 2021 in Lansing. David was born February 21, 1945, in Lake Odessa, MI, the son of Rev. C. Fred and Joan Evelyn (Copeland) Young. He graduated from Lansing Sexton High School in 1963 and went to work with General Motors. The U.S. Army drafted Dave into service in the Vietnam War in 1965. He proudly served two years before returning to GM, where he worked 43 years, retiring as a Union Representative to Locals 652. Dave was internationally renowned in the world of ice fishing. He first started fishing with his sons, over 40 years ago. He was one of the finest and widely-known anglers to use the tight line method, a technique developed in his native Michigan. More than anything, he loved to share his knowledge with others, leading him to teach thousands in the art of tight line ice fishing. He toured the country on the pro circuit, appearing in countless tournaments and shows, sponsored by Schooley Reels, Clam, and HT. Many will recognize his regular appearance on the TV Show ICE MEN. The North American Ice Fishing Circuit (NAIFC) says of Dave, "Dave's love for teaching kids, for teaching tight lining is unmatched. The number of rods he gave away to people he just met is not countable. When he and son Mark won a prize at an event he looked for the nearest kid to give the equipment to…God bless, tight lines, rest in peace." Many will remember Dave's generosity, passion for the outdoors, dedicated to the Detroit Tigers, and, above all, love for his family. Much of Dave's life was dedicated to hunting and fishing with his sons, and spending time with his grandchildren. David is survived by his wife and life partner of over 55 years, Christine Young; sons, Matthew (L. Jacobsen) Young, Mark Young (Ann Johnson), Michael Young, Martin (Jessica Herrick) Young; daughter, Mandi Wallace; 9 grandchildren, Lindsey (Blake) Greiner, Josh (Sara) Young, Tyler Young, Brendan Brethauer, Haley Griffin, Hannah Thompson, Delilah Young, and MaKenna Young; 5 great-grandchildren, Justin, Brody, and Maverick Griener, and Easton and Connor Young; sister, Anita Stevens; many nieces and nephews; and countless close friends and sporting buddies. He was predeceased by his parents and his sister, Pamela Young. Friends and family are encouraged to support David’s family by sharing memories on his tribute page at www.prayfuneral.com. A Memorial Gathering will be held from 6:00 – 8:00 p.m. on Monday, January 10, 2022 at Pray Funeral Home, Charlotte. The family is in the care of Pray Funeral Home.

The family of David Cline Young created this Life Tributes page to make it easy to share your memories.

Send flowers to the Young family.