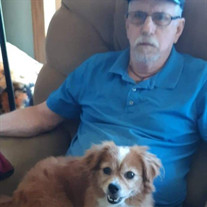 Donald Duane Keehn, 69, a hardworking and patriotic husband, father and grandfather, died Friday, April 23, 2021 in Lansing. Don was born July 29, 1951, in Eaton Rapids, MI, the son of Carleton Ellis and Gloria Jean (Harper) Keehn. He graduated from Springport High School before going to work for Oldsmobile in Lansing. His career was cut short, however, when he was drafted to serve in the U.S. Army during the Vietnam War, where he served as a side gunner aboard a helicopter as a member of the Pacesetters Team Company. He courageously re-enlisted for multiple tours, eventually serving 13 years as a career Staff Sergeant. During his years of service, he was stationed in Germany, and several U.S. states, including Kentucky, where he met his lifetime love, Janice Joan Thornberry. The two married on July 16, 1974 and started their family. Following his retirement from the Army, he worked at Akemi Plastics in Eaton Rapids, Carefree Windows in Charlotte, and many years at Johnson's Lumber. He was a lifetime member of the VFW Post 2406 in Charlotte. In his spare time, he enjoyed hunting, fishing, football, and time spent with his grandchildren, his cats, Sassy and Felix, and his dog, Shaggy. In his early years, he even dabbled in car racing in Germany. Many will remember Don's love for family, friends, and his country. Don is survived by his wife of 46 years, Janice; daughter, Angela Keehn; 7 grandchildren, Robbie Richardson, Alexandria Richardson, John C. Vincent, KateLynn (Bryce) Angel, Matthew Keehn, Devon Keehn, and Kevin Keehn; 9 great-grandchildren; sisters, Pam (Tom) Braatz and Carla (Ken) Mazur; brother, Larry Keehn; and several nieces and nephews. He was predeceased by his son, Donald "Donnie" Keehn in 2011. Friends are encouraged to support Donald's family by attending services or sharing memories on his Tribute Page at www.prayfuneral.com. Visitation will be from 12:00 - 2:00 p.m. on Tuesday, April 27, 2021, followed immediately by Funeral Services at 2:00 p.m. at Pray Funeral Home Gardens in Charlotte with Pastor Chuck Jenson officiating. Mask, group capacity, and distancing guidelines will be practiced. The funeral will be webcast so you may watch it from any computer, smartphone, or mobile device that has internet access. Go to www.prayfuneral.com, click on Don's tribute, then click on Photos and Videos from your computer (or Media from your smart phone). If desired, the family suggests memorial contributions to the family in care of Angela Keehn. The family is in the care of Pray Funeral Home, Charlotte.

The family of Donald Duane Keehn created this Life Tributes page to make it easy to share your memories.

Send flowers to the Keehn family.