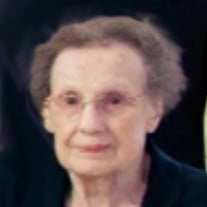 Dortha "Dorothy" Fay Anderson, 88, of Charlotte, died peacefully on Saturday, June 29, 2019 in Lansing. Dorothy was born November 12, 1930 in West Virginia. She married her lifetime love, Charles Atlee Anderson on February 23, 1950, and the two started their family. They moved briefly to Illinois, and later to Charlotte, MI, in 1964, where both Dorothy and Charles worked for Owens-Illinois. Dorothy also worked as a beautician in her early years. She enjoyed time outdoors in the yard and, most importantly, her children and grandchildren. Dorothy is survived by her son, Chuck (Laurie) Anderson; daughter, Donna (Carl) Hartman; grandchildren, Andrew (Rebecca) Hartman, Josh (fiancé Crystal Arcicovich) Hartman, Alyssa (Robert) Flahive, Ashley (fiancé Jordan Rogers) Anderson, and Amanda (Aaron) Tarr; and her great-grandchildren, Jackson and Rosalynn Hartman, Tyler Flahive, and Hudson Tarr. She was predeceased by her husband, Charles, in 1976. Visitation will be on Tuesday, July 2, 2019 from 5:00 - 8:00 p.m. at Pray Funeral Home, Charlotte. A private family graveside will take place at Maple Hill Cemetery in Charlotte. If desired, the family suggests memorial contributions to Hospice of Lansing. Friends and family are asked to share memories of Dorothy on her Tribute Page at www.PrayFuneral.com.

The family of Dortha Fay Anderson created this Life Tributes page to make it easy to share your memories.

Send flowers to the Anderson family.