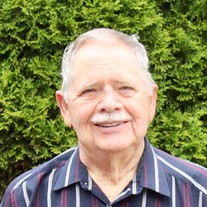 Douglas Waldo Peck, devoted husband, father and grandfather, of Charlotte died on Friday, October 2, 2020. Doug, 85, was born December 15, 1934 in Charlotte to Waldo Fetter and Vera Liola (Rogers) Peck. Doug graduated from Charlotte High School class of 1953, then proudly served his country in the Army as an Engineer Specialist. He was employed with General Motors for over 30 years, retiring in 1985 as a General Foreman. He was an encourager to those people who spoke up to share their opinions and ideas. His supervisory skills often gained him the "troublemaker employees" because he was able to work with and become a friend to them. He owned Our Own (formerly known as Gamble's) Hardware Store and enjoyed helping with customers quandaries and liked to offer helpful solutions. He also devoted 15 years with the Eaton County Sheriff Patrol in the Handicap Patrol. Doug is survived by his children, Steve (Kerry) Peck, Shannon (Larry) Bond, Tammy (Kevin) Voigt; step-children, Jody (Mike) Mankerian, Kerry (Steve) Peck; 14 grandchildren; 10 great-grandchildren; many nieces and nephews; special friend whom he spent the past 10 years in Florida with, JoAnn Butera. He was predeceased by his wife, Joellyn (VanDyke) Peck; brother, Roger Peck; sister, Margaret VanLiew; and his parents. Funeral services will be held Tuesday, October 6, 2020 at 2:00 P.M. at Pray Funeral Home in Charlotte with Pastor Charles Jenson officiating. Visitation is Monday, October 5 from 6:00-8:00 P.M. Mask and distancing guidelines will be practiced. The funeral service will be webcast so you may watch it from any computer, smartphone, or mobile device that has internet access. Go to www.prayfuneral.com, click on Doug's Tribute, and then click on Photos and Videos from your computer (or Media from your smart phone). Just prior to the beginning of the service, a link will appear on this page to watch the webcast. If desired, the family suggests memorial contributions to the Eaton Community Palliative Care. Friends and family are encouraged to share memories of Doug on his Tribute Page at www.PrayFuneral.com. The family is in the care of Pray Funeral Home, Charlotte.

The family of Douglas Waldo Peck created this Life Tributes page to make it easy to share your memories.

Send flowers to the Peck family.