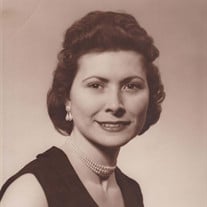 Filomena "Mena" Kepler, 92, of Charlotte, died peacefully on Sunday, December 13, 2020 in Charlotte. Mena was born February 1, 1928 in Bari, Italy. In her youth, she took a job at a local Cantina during WWII, where she waited on American G.I.s. It was there she met a young man from Indiana serving in the U.S. Air Corps, Darwin George Kepler, who inquired about laundry service, to which Mena replied that her mother could help. Darwin and Mena fell in love, and after the war, she moved to Michigan, becoming the first Lansing Area Italian "War Bride." They married on December 21, 1944. Mena's charm and personality landing her a job as an elevator attendant at the Stoddard Building downtown Lansing, a job she parlayed into working women's retail clothing at Suites. Over 30 years, she also worked at Greens and Jacobson's. In her spare time, she did everything possible to be an American, including joining a women's bowling league. She had many other "war bride" friends whom she met as a member of the Young Woman's Christian Organization, which was predominantly a group of women who had come to the U.S. after the war. In 1951, she became a naturalized citizen, and she and Darwin raised their children. Mena is survived by her sons, George (Garnett) Kepler, Richard "Dick" (Julie) Kepler, and William "Bill" (Lynne) Kepler; daughter, Cindy (Greg) Cummings; 12 grandchildren; 23 great-grandchildren; 5 great-great-grandchildren; two siblings in Italy, Teresa from Bari and Emanuele from Rome; and her nieces and nephews. She was predeceased by her husband, Darwin Kepler; their infant son, Franco Kepler; granddaughter, Karie Elsworth; and 3 siblings in Italy. A graveside service will take place at a later date at Chapel Hill Memorial Gardens in Lansing. If desired, the family suggests memorial contributions to Grace Hospice or the Michigan Alzheimer's Association. Friends and family are encouraged to share memories of Mena on her Tribute Page at www.PrayFuneral.com. The family is in the care of Pray Funeral Home, Charlotte.

Filomena "Mena" Kepler, 92, of Charlotte, died peacefully on Sunday, December 13, 2020 in Charlotte. Mena was born February 1, 1928 in Bari, Italy. In her youth, she took a job at a local Cantina during WWII, where she waited on American G.I.s.... View Obituary & Service Information

The family of Filomena Kepler created this Life Tributes page to make it easy to share your memories.

Send flowers to the Kepler family.