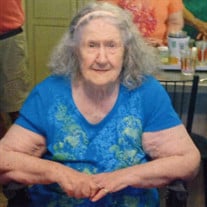 Frances Eunice Lee, 99, of Charlotte, died peacefully at home on Wednesday, August 8, 2018. Frances was born June 8, 1919, in Flint, MI, the daughter of Ora and Mabel (Fuller) DeLong. At an early age, the family moved to the Upper Peninsula to follow the logging industry. The Great Depression soon struck, and they moved around Michigan wherever jobs could be found. During this time, she met a young man working in an onion field near Plainwell, Maxwell Lee. The two fell in love and soon married and moved to the Eaton Rapids area. They often spent winters in Alabama, where Frances served her country as an LPN at Camp Rooker. Later, during WWII, she continued her service as a true “Rosie the Riveter” at American Seating in Grand Rapids. They later moved back to Eaton County, where Frances worked as an LPN for many years, including time in eldercare at Storybook House in Eaton Rapids. Frances loved time spent up North at her home on Huffman Lake, near Vanderbilt. She claimed she could make Gaylord in two hours with her Pontiac. As soon as she arrived, she’d make her way to the lake to spend time fishing, her favorite pastime. She enjoyed walking in the woods of “God’s Country,” searching for mushrooms and taking in nature. Frances made the world’s best chicken and dumplings and enjoyed cooking for her many family members. Her children and grandchildren will forever remember her sweet youthful voice and her spunky spirit. Frances is survived by her daughter, Dixie Nevada Wright; son, Robert E. (Janet) Lee; grandchildren, James (Jill) Wright, Chris (Tom) Bennett, Dana Wright, Fran Wright, Dean (Becky) Wright, twins Terry and Garry Wright, Shannon (Tom) Mercier, Robert E. Lee, John (Coffee) Lee, Mike (Jannetta) Lee, Frank (Andra) Lee, Edward Lee, and Carrilyn Lee; 19 great-grandchildren; and 16 great-great-grandchildren. She is predeceased by her husband, Maxwell and her son, “Bud” Lee. A Memorial Service will be held at 12:00 noon on Saturday, August 18, 2018 at Pray Funeral Home with Pastor Charles Jenson officiating. Visitation will be from 10:00 a.m. – 12:00 p.m. just prior to the service. Interment at a later date will take place in Rose Hill Cemetery in Eaton Rapids. If desired, the family suggests memorial contributions to Eaton Community Palliative Care. Friends and family are encouraged to share memories of Frances on her Tribute Page at www.PrayFuneral.com. The family is in the care of Pray Funeral Home, Charlotte.

Frances Eunice Lee, 99, of Charlotte, died peacefully at home on Wednesday, August 8, 2018. Frances was born June 8, 1919, in Flint, MI, the daughter of Ora and Mabel (Fuller) DeLong. At an early age, the family moved to the Upper Peninsula... View Obituary & Service Information

The family of Frances Eunice Lee created this Life Tributes page to make it easy to share your memories.

Send flowers to the Lee family.