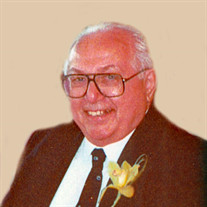 Francis Ray "Dick" Reynolds, 96, a loving father, grandfather and husband, died Sunday June 16, 2019 in Charlotte, MI. Francis was born November 15, 1922, the son of Millard and Neva (Miller) Reynolds. He was one of twelve siblings in his childhood home. Francis joined the Army during WWII and was one of many who stormed the shores of Normandy on June 6, 1944, D-Day + 4. His job was to go in front of the army re-building bridges and roads so the allied forces could advance against the German army. In 2017 Francis was honored to participate on the Honor Flight to Washington, DC to view the World War II monuments and participate in the programs for the tour. Often he could be found wearing his Honor Flight badge. Francis married the love of his life Elizabeth Gloria Ward on August 2, 1946. They enjoyed 72 years together raising their children. Francis was a hardworking man, stubbornly refusing help, preferring to do things himself. For a few of the years his family lived in Arizona, Francis was a driver for the Coca-Cola Company and worked at a sign company where he worked alongside former Navaho Windtalker's who had helped the allies communicate in code during WWII. ​After returning to Michigan he worked for Schaefer's Bakery as a machine repair person.​ Woodworking was a favorite hobby until his early 90's. Above all Francis loved his family and did whatever needed to be done as no job was too small for him. Francis is survived by his wife, Elizabeth (Ward) Reynolds; daughter, Linda Burris; sons, Jeff (Mary) Reynolds, Gordon (Jill) Reynolds, Scott (MaryJane) Reynolds; six grandchildren; five great-grandchildren; sister, Tillie; and brother, Rex Reynolds. He was predeceased by his son-in-law, Tom Burris. Graveside services will be held at Ft. Custer National Cemetery Tuesday, July 2, 2019 at 11:30 AM. If desired, the family suggests memorial contributions to Charlotte VFW Post 2406. Friends and family are encouraged to share memories of Dick on his Tribute Page at www.PrayFuneral.com. The family is in the care of Pray Funeral Home, Charlotte.

Francis Ray "Dick" Reynolds, 96, a loving father, grandfather and husband, died Sunday June 16, 2019 in Charlotte, MI. Francis was born November 15, 1922, the son of Millard and Neva (Miller) Reynolds. He was one of twelve siblings in his... View Obituary & Service Information

The family of Francis Ray Reynolds created this Life Tributes page to make it easy to share your memories.

Send flowers to the Reynolds family.