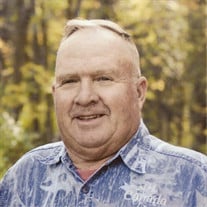 Garry Arthur Haigh, 75, of Charlotte, died peacefully at his home on Thursday, December 13, 2018. Garry was born July 17, 1943 in Ann Arbor, MI, the son of Amos and Joyce (Smith) Haigh. He graduated from Charlotte High School in 1961. Garry married Marjorie Kline in 1965 and the two started their life together farming and raising their family. He also enlisted in the Michigan Army National Guard, serving 6 years. Garry's skill as a craftsman and carpenter led him to earn his contracting license and work self-employed for over 30 years. His love for the outdoors found him fishing and hunting often. Above all, Garry loved his family. Garry is survived by his significant other, Bonnie Porter; son, Arthur (Candy) Haigh of Charlotte; daughter, Jeannette (John) Holland of Weidman, MI; grandchildren, Matthew (Nikki) Haigh of Eaton Rapids, Dylan (Makayla) Haigh of Charlotte, Nichelle (Ben Davison) Holland of Grand Rapids, Michaela (William) Aune of Cheboygan, and Jessica Holland of Weidman; great-grandchildren, Evelyn and Eloise Haigh, Corben and Wyatt Aune, Henry Davison, and Amos Haigh; siblings, Larry (Mary) Haigh of Bellevue, Daniel (Helen) Haigh of Charlotte, David (Pat) Haigh of Sunfield, Sandra (John) Pifer of Charlotte, and Scott (Ruth) Haigh of Charlotte; and many aunts, uncles, nieces and nephews. Garry is predeceased by his wife of 25 years, Marjorie Haigh in 1990. Friends are encouraged to support Garry's family at visitation and funeral services. Funeral services will be at 11:00 a.m. on Monday, December 17, 2018 at Pray Funeral Home in Charlotte with Pastor Randy Royston officiating. Visitation will be from 2:00 - 4:00 and 6:00 - 8:00 p.m. on Sunday, December 16, 2018 at the funeral home. If desired, the family suggests memorial contributions to the American Cancer Society. Friends and family are encouraged to share memories of Garry on his Tribute Page at www.PrayFuneral.com. The family is in the care of Pray Funeral Home, Charlotte.

The family of Garry Arthur Haigh created this Life Tributes page to make it easy to share your memories.

Garry Arthur Haigh, 75, of Charlotte, died peacefully at his...

Send flowers to the Haigh family.