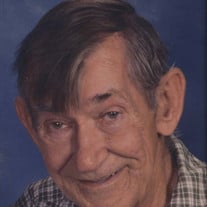 Gene Ferd Spitz, a happy family man with a bit of a feisty streak, passed away at his home in Lake, Michigan on Sunday, August 23 following a short battle with cancer. Gene was born in San Fernando, CA in 1946. Gene's family moved to Michigan when he was an infant. Gene worked for General Motors in Lansing, Michigan. He started as a staff member in the cafeteria at Fischer Body and worked his way into the transportation department for Oldsmobile, driving truck and delivering parts to the Olds plant. He retired from General Motors in 1997 after 32 years. While working at the Fischer Body cafeteria a co-worker, Virginia Thompson, encouraged Gene to meet her daughter Sherry. Sometime later in 1966, they were married in Lansing. Together they made their home in Holt, where they raised their two daughters Jennifer and Kelly. Gene's family remembers many great times. There were trips to Tennessee to visit Sherry's relatives and one memorable trip to Disneyland in CA. After the children were grown, there were trips with other family members that included a long trip to the west coast of the United States. There were also family times spent on snowmobiles, dune buggies, and boats. After his retirement Gene and Sherry moved to Charlotte and wintered in Haines City, Florida where Gene was always up for a game of poker, shuffleboard, or pool. He had a ready smile and was quick to strike up a conversation. Many will remember that Gene was never afraid to speak his mind. Many summer days were spent at Eight Point Lake near Lake, Michigan with family and friends. In recent years they sold their home in Charlotte and moved their residence to Lake. Gene had a love of card games from childhood that developed into a hobby of gambling for fun; that made him a frequent visitor to Firekeeper's and Soaring Eagle Casinos. His last visit to Soaring Eagle was less than a week before he died. Above all else Gene loved his family. He was as comfortable with his wife's side of the family as he was with his own. They would all tell you, however, that he was most proud of his grandchildren Hailey, Alissa, Madison, Skylar, Zachary, and Cameron, and his great-granddaughter Emerie. Gene is survived by his wife, Sherry, his two daughters Jennifer (Christopher) Sible, and Kelly Spitz; his six grandchildren and great granddaughter; seven brothers and two sisters; and many nieces and nephews. The family will be holding a life celebration on Saturday 8/29/2020 from 1-4pm at the Limauro residence, 6449 Sherman Road, Charlotte, MI. Friends are encouraged to support Gene's family either at the services, or online through Gene's Tribute Page at www.PrayFuneralHome.com If desired the family suggests memorial contributions to Sherry Spitz 10974 Rock Road, Lake, MI 48632 or a charity of your choice. The family is in the care of Pray Funeral Home, Charlotte.

Gene Ferd Spitz, a happy family man with a bit of a feisty streak, passed away at his home in Lake, Michigan on Sunday, August 23 following a short battle with cancer. Gene was born in San Fernando, CA in 1946. Gene's family moved to Michigan... View Obituary & Service Information

The family of Gene Ferd Spitz created this Life Tributes page to make it easy to share your memories.

Gene Ferd Spitz, a happy family man with a bit of a feisty streak,...

Send flowers to the Spitz family.