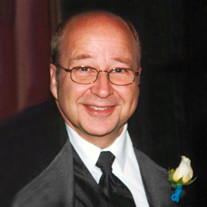 George Nicklas "Nick" Reichert Jr., 70 of Charlotte, who enjoyed cars immensely because "It's who I am," died January 27, 2021. Born in Owosso, MI to George Nicklas Reichert Sr. and Frances Irene (Parker) Reichert on July 18, 1950, Nick started working at his dad's garage at the age of 8, and worked with his father until his death in 1968 when Nick was 18. He then worked at the Ford battery plant in Owosso before going to college, then enlisted in the Navy Seabees Construction Battalion to serve during Vietnam. After Nick's return, he found a new job at Consumers Energy Fleet Department, where he worked for 35 years. Following his retirement in 2008, Nick served as a consultant for a handful of years. In 1975 Nick married Lucille "Lucy" Humphrey, and together they raised two sons that taught him about the depth of a father's love. Nick was very proud to be a father, and even more proud to be a grandfather when his sons grew and had their own children. He could often be found wearing a shirt that read, "Great Dads Get Promoted to Grandpas." As a father, Nick went beyond the usual call of duty to help his children build their lives. His ever-present dedication manifested in many ways, including helping to build a home, moral support, and a firm sense of support. Nick and Lucy enjoyed spending time with their family and created many special memories together during their 45 years of marriage. Nick's love of cars came from working side-by-side with his dad in his automotive shop as he was growing up. Because of this love, Nick became a member of the National Association of Fleet Administrators, Society of Automotive Engineers Affiliate, and was a certified Master Automotive Technician and Master Heavy Duty Truck Technician from the National Institute for Automotive Service Excellence. Nick will be missed by his family, including his wife of 45 years, Lucy; sons, Nicklas (Sarah) Reichert, and Jameson B. Reichert; grandchildren, Jonathan, Eliana, Emily and Renata; siblings, Gary (Janet) Reichert, Dianne Green, Joanne (Tom) Skinner; and many nieces and nephews. He was predeceased by his parents. Friends are encouraged to support Nick's family. Nick was a member of First Baptist Church in Charlotte, where funeral services will be held at 11:00 a.m. on Friday, February 5, 2021 with Ryan Manning officiating. Visitation will be one hour prior to the service, at the church. Mask, group capacity, and distancing guidelines will be practiced. The funeral will also be webcast so you may watch it from any computer, smartphone, or mobile device that has internet access. This can be accessed beginning 15 minutes prior to the service. If desired, the family suggests memorial contributions be made to the First Baptist Church of Charlotte Senior Programs. Friends and family are encouraged to share memories of Nick on his Tribute Page at www.PrayFuneral.com. The family is in the care of Pray Funeral Home, Charlotte.

The family of George Nicklas "Nick" Reichert Jr. created this Life Tributes page to make it easy to share your memories.

Send flowers to the Reichert family.