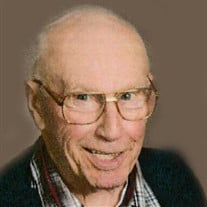 Gerald "Jerry" Joseph Starr, 89, a hardworking husband, father, and horseman, died peacefully on Tuesday, April 23, 2019 in Eaton Rapids. Jerry was born March 11, 1930 in Grand Ledge, the son of Wilbur and Marcella (Batsche) Starr. He graduated from Charlotte High School in 1948, where he ran track under Coach Mac Gobel. Following graduation, he went to work alongside his father as a carpenter, shortly after taking ownership of the family business at the age of 26. He owned and operated Jerry Starr Building and Remodeling for over 50 years and passed the trade onto his sons. Throughout the years, Jerry built countless homes and important landmarks of Charlotte, including the altar at St. Mary Catholic Church, which is still in use. Many will remember Jerry's wagon and team of ponies, especially as a fixture of the Charlotte Frontier Days Parade, of which he and his wife, Eilene, were Grand Marshals in 1995. He was a founding member and President of the Eaton County Sheriff Mounted Division, and Superintendent of the Open-Class Showing at the Eaton County Fair. He touched the lives of thousands through his lifetime involvement in 4H, earning him the Emerald Award. He was also a devoted member of St. Mary Catholic Church in Charlotte. Jerry was proud of providing for his family. They took family vacations as often as possible, especially to Horseshoe Lake. He loved opening day of Pheasant season, because it meant spending the day with his sons and grandsons, and a family dinner of baked beans and corn bread to follow. Jerry could also "kick em up" on the dance floor, square dancing and doing the polka at countless barn dances. Jerry is survived by his wife of nearly 14 years, Fern Starr; children, Denis (Karen) of Olivet, Kathy (Jim) Pion of Olivet, Tim (Sherry) of Charlotte, Mark (Cheryl) of Charlotte, Karen (Tony) Southward of Charlotte, Daniel (JoAnn) of Adrian, Chris (Shelly) of Charlotte, Mary (Doug) Campbell of Olivet, and Jimmy (Lisa) of Eaton Rapids; 28 grandchildren; 31 great-grandchildren; 1 great-great-grandchild; sister, Jeannette Sommer of Charlotte; and brother, David Starr of Charlotte; step-children, Glen Burkett, Helen (Gary) Vedder, Kenneth (Debby) Burkett, David (Barbara) Burkett, Sally (David) Bivens, Mary (Jeff) McKillop, and their children and grand-children. He was preceded in death by his wife of 53 years, Eilene (Tanner) Starr; sister, Laurel Pray, and brother, Arthur Starr. A Funeral Mass of Celebration will be held at 11:00 a.m. on Friday, April 26, 2019 at St. Mary Catholic Church in Charlotte with Rev. Fr. Dwight Ezop officiating. Visitation will be on Thursday, April 25, 2019, at Pray Funeral Home from 2:00 - 4:00 and 6:00 - 8:00 p.m. with a Rosary at 8:00 p.m. Interment will take place at West Carmel Cemetery. Memorial contributions may be made to St Mary Catholic Church and The CareTeam Home Health and Hospice. Friends and family are encouraged to share memories of Jerry on his Tribute Page at www.PrayFuneral.com. The family is in the care of Pray Funeral Home, Charlotte.

The family of Gerald 'Jerry' Starr created this Life Tributes page to make it easy to share your memories.

Send flowers to the Starr family.