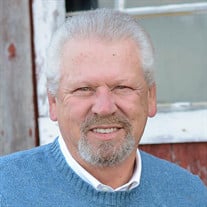 James Edward Davy, 70, of Charlotte, died Thursday, September 24, 2020 in Lansing. Jim was born November 24, 1949 in Shenandoah, Pennsylvania, the son of Jack and Marion (Sayre) Davy. In his youth, the family moved to Walled Lake, MI, where he graduated from Walled Lake Central in 1967. Shortly after, on a visit to the beach, he asked if he could sit alongside a pretty young lady, Jean. This started their journey together. Jim left for basic training and was eventually stationed in Heidelberg, Germany. Jean followed him to Germany, and in 1971 the couple got married in Basil, Switzerland. He proudly served in the U.S. Army as a firefighter during the Vietnam War. Upon their return, they started a family and Jim took a job in Walled Lake working for Dedoes. In 1990, Jim and Jean moved their family to Charlotte, MI where Jim worked in Sales with AdTech Plastics. He retired from Cass Polymers in 2015. Jim was an avid outdoorsman, enjoying hunting and fishing, and following the Wolverines, Detroit Tigers, and Lions. His pride in life was his grandchildren, Jack and Mya. Jim followed their sports and activities, and treasured every moment spent together as a family. Many will remember him as an all-around great person with a happy smile and a kind heart. Jim is survived by his wife, Jean Davy; son, Jeff (Stephanie) Davy; daughter, Jessica Davy; grandchildren, Mya and Jack Davy; brothers, Richard Davy, John Davy, and Brian Davy; and his nieces and nephews. A private memorial gathering will take place at Jeff and Stephanie's home. If desired, the family suggests memorial contributions to Wounded Warrior Project. Friends and family are encouraged to share memories of Jim on his Tribute Page at www.PrayFuneral.com. The family is in the care of Pray Funeral Home, Charlotte.

James Edward Davy, 70, of Charlotte, died Thursday, September 24, 2020 in Lansing. Jim was born November 24, 1949 in Shenandoah, Pennsylvania, the son of Jack and Marion (Sayre) Davy. In his youth, the family moved to Walled Lake, MI, where... View Obituary & Service Information

The family of James Edward Davy created this Life Tributes page to make it easy to share your memories.

Send flowers to the Davy family.