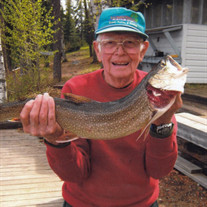 James Edward Miller, a high school teacher affectionately known as "Old Man Miller," died following an injury from a recent fall. James, 89, of Olivet was born February 21, 1929 at his family's farm in Olivet, and died February 10, 2019. The son of Claude and Jessie (Dodd) Miller, James became known as the go-to-guy for family and friends, because he could build or fix anything. He earned his Bachelor's Degree from MSU and then his Master's Degree in teaching from Western Michigan University. Mr. Miller taught auto mechanics, machine shop, and drafting for 40 years at Battle Creek Lakeview High School, and he also taught at Kellogg Community College, as well as directing the evening adult high school completion at Battle Creek Lakeview for 23 years. He loved his students, and especially enjoyed when he could "scare them straight," and his students had numerous stories about him they loved to share, both real and embellished. During his tenure at Lakeview he was named teacher of the year and received a commendation from the Governor of the State of Michigan. James loved fishing with his family, and even though he had a pond on his farm, he only fished there with his grandchildren and great-grandchildren. He and his wife, Cleone, fished for 25 years at Lake O'Sullivan in Northern Ontario, and he also enjoyed catching brook trout in the Upper Manistee River area, family fishing trips were some of their favorite times together. They also enjoyed driving around the country for Egg Art shows, and James was very talented with creating animated egg art, including Christmas displays, R2D2 from Star Wars, and an amazing space ship. In keeping with his abilities to do anything, he finished out the interior on their new home in 1994 on the original family farm. Other things James enjoyed included his 1972 M.G., which he drove to school and had it rebuilt years ago, and target shooting as well as loading his own ammunition. James is survived by his wife of 64 years, Cleone; daughter, Susan Ashley; son, Timothy (Annette) Miller; 3 grandchildren; and 3 great-grandchildren. He was preceded in death by his parents, as well as all of his siblings. Friends are encouraged to support the Miller family at visitation and funeral services. Funeral services are Friday, February 15, 2019, 10:00 AM at Pray Funeral Home in Charlotte with Pastor Randy Royston officiating. Visitation is Thursday, February 14, 2-4:00 PM and 6-8:00 PM at the funeral home. If desired, the family suggests memorial contributions to Battle Creek Food Bank. Friends and family are encouraged to share memories of James on his Tribute Page at www.PrayFuneral.com. The family is in the care of Pray Funeral Home, Charlotte.

The family of James Edward Miller created this Life Tributes page to make it easy to share your memories.

Send flowers to the Miller family.