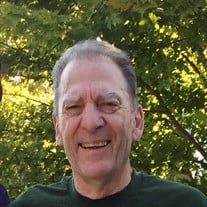 James H. Vogel II went home to be with the Lord Saturday afternoon, March 26, 2022, surrounded by his wife and family members. Born in Mt. Pleasant, MI, to James Henry Vogel and Alma Mae (Gross) Vogel, he grew up there where he attended school and graduated in 1965. He then joined the Army and served in Vietnam. Upon returning home, he began working at Oldsmobile and married Gladys Perez. They had five children. In 1989, he took the GM buy-out and moved his family back to Mt. Pleasant where he purchased and operated Stan's restaurant. After the marriage ended, he moved back to the Lansing area. He married Diane (Wawiernia) Kirby Weaver. They lived in Charlotte for a time and then built a house outside Eaton Rapids. They enjoyed traveling and camping with the dogs, and just going for drives. They purchased guitars and each learned to play. Jim could fix anything, build anything, and was always there to help anyone who asked. His favorite thing was time spent with grandchildren. Jim is survived by his widow, Diane; daughters, Christine (Parsons), Michelle, and Johanna; sons, Jim (Jennifer), Matt (Michelle); stepdaughters, Erin (Cameron) Bramer and Jess (Joe) Carey; and stepson, Ben (Kayla) Kirby; eleven grandchildren; his sister, Nan Topor, and brother, Jack; two nephews and a niece. He was preceded in death by his parents and a niece, Anna Demrell, as well as her father, Steve Topor. Jim's greatest passion was the Gospel and sharing the Good News with others. When asked about a funeral, he said, "Nope. Everybody should know what I stand for and what I would say. - Come to Jesus!" And he calls to us from the other side, "Come to Jesus!" Jim designated that his body be donated to science, so even after he has left this world, he continues to be of use and help to others. Those wishing to make a charitable contribution in Jim's honor may consider Voice of the Martyrs or Samaritan's Purse. Also gifts to the American Cancer Society or to Hospice of Lansing would be appropriate and appreciated.

James H. Vogel II went home to be with the Lord Saturday afternoon, March 26, 2022, surrounded by his wife and family members. Born in Mt. Pleasant, MI, to James Henry Vogel and Alma Mae (Gross) Vogel, he grew up there where he attended school... View Obituary & Service Information

The family of James H. Vogel II created this Life Tributes page to make it easy to share your memories.

James H. Vogel II went home to be with the Lord Saturday afternoon,...

Send flowers to the Vogel family.