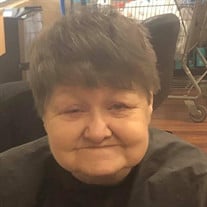 Janet Rae Rhoden, 66, of Silver Creek Georgia, formerly of Charlotte, passed away on September 14, 2019 in Canton GA. Janet was born to Lloyd and Laura (Midget) Shaver in Charlotte on February 5, 1953. Many people may remember Janet from... View Obituary & Service Information

The family of Janet Rae Rhoden created this Life Tributes page to make it easy to share your memories.

Send flowers to the Rhoden family.