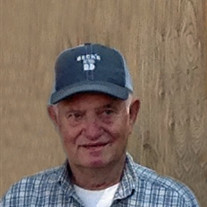 Jerry Lee Cords, a caring, genuine, hardworking and loyal father, grandfather, brother and friend, died August 25, 2021. Jerry, 79, was born August 24, 1942 in Charlotte, MI to Loyd and Florence (Boyd) Cords. He was a graduate of Olivet High School. On September 23, 1961, Jerry married the love of his life, Marilyn Serrels, and together they started their legacy. Working hard was no fear for Jerry, he worked very hard to provide for his family. He worked alongside his father, brother, and in later years his sons for LJT Well Drilling, and also as a Cash Crop Farmer and the owner of FML Inc. Jerry was very proud to be able to pass his work ethic down to his children who followed in his footsteps with working on the family farm and the well drilling business. When Jerry was not farming or working, he enjoyed hunting, especially hunting trips out west, fishing, horse pulling, going to local tractor pulls, and taking trips around the country in his motorhome. Jerry had the honor of receiving the Honorary Member FFA chapter award for his volunteer work with the FFA over the years. Above all his proudest accomplishments were his family and his successful farming operations that he created. Jerry is survived by his sons, Loyd (Angie) Cords, John (Sherry) Cords, Seth (Jill) Cords; grandchildren, Jennifer, Cody (Samantha), Blaine and Allison Cords; great-grandchildren, Jake and Delilah Crowner; siblings, Terry (Emma) Cords, Connie (Jim) Hiatt. Jerry was predeceased by his wife of 30 years, Marilyn; granddaughter, Paige Cords; grandson, JC Cords; brother, Lonnie Cords; and his parents. Friends are encouraged to support Jerry's family at visitation and funeral services. Funeral services will be held Tuesday, August 31, 2021, 11:00 a.m. at the family farm in Charlotte with Pastor Scott Brood officiating. Visitation is Monday, August 30, 2021 from 2-4:00 p.m. and 6-8:00 p.m. in the Pray Funeral Home Gardens. If desired, the family suggests memorial contributions to The Paige Cords Memorial Fund to benefit local 4-H and FFA projects. Friends and family are encouraged to share memories of Jerry on his Tribute Page at www.PrayFuneral.com. The family is in the care of Pray Funeral Home, Charlotte.

The family of Jerry Cords created this Life Tributes page to make it easy to share your memories.

Send flowers to the Cords family.