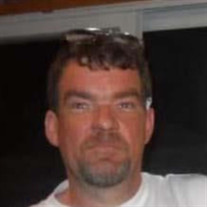 Jerry Lee Davids, age 57 of Charlotte, a fella who was a kind and generous soul under his rough exterior, died December 17, 2021 in Lansing following a lengthy illness. Jerry was born October 10, 1964 to his parents Larry Lee Davids, Sr. and Marilyn Jean (Heikkila) Davids, in Charlotte. Jerry attended Charlotte High School graduating in 1983. Following graduation he enlisted in the U.S. Army. Jerry was known to many as a strong willed, boisterous, "tell you what was on his mind in no uncertain terms" type of guy. Underneath his roughhewn exterior he had a generous streak that was always willing to help those in need. His work in the Lansing area was in manufacturing and drywall installation. He was a huge fan of Michigan State University sports. Above all he considered his family most important in his life. He was most proud of the fact that after a troubled past he was able to turn his life around. Jerry is survived by his children Jody Copeland, Danielle (Cass) Escalante, and Jason (Heather) Davids, step-children Tiera (Ben) Spitler and Chrissy Fedewa; five grandchildren; his parents Larry Davids Sr, and Marilyn Stiles; and his siblings Larry (Janet) Davids Jr, Ricky Davids, Chad (Heather) Stiles, Connie (John) Hong and Chantel (Frank) Bonilla. He was predeceased by his infant daughter Samantha Marilyn Jean Davids; step-daughter Suzanne Fedewa, and grandparents Mary and Otto Heikkila and Florence and Bernard Davids. Friends and family are encouraged to support Jerry's family by attending services or sharing memories on his tribute page at www.prayfuneral.com . The family will receive visitors 5- 8 PM Sunday December 26 at Pray Funeral Home. Funeral services to celebrate his life 11:00 AM Monday December 27, 2021, with Pastor Charles Jenson officiating. The funeral will be webcast so you may watch it from any computer, smartphone, or mobile device that has internet access. Go to www.prayfuneral.com , click on Jerry's tribute, then click on Photos and Videos from your computer (or Media from your smart phone). Memorial contributions are suggested to Cardboard Prophets. The family is in the care of Pray Funeral Home.

Jerry Lee Davids, age 57 of Charlotte, a fella who was a kind and generous soul under his rough exterior, died December 17, 2021 in Lansing following a lengthy illness. Jerry was born October 10, 1964 to his parents Larry Lee Davids, Sr.... View Obituary & Service Information

The family of Jerry Lee Davids created this Life Tributes page to make it easy to share your memories.

Jerry Lee Davids, age 57 of Charlotte, a fella who was a kind...

Send flowers to the Davids family.