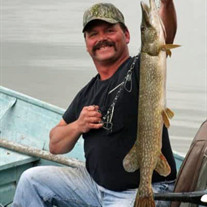 John J. Conrad of Charlotte, age 57, passed away surrounded by his family and friends on Thursday, August 13, 2020 after a short illness. He was born on April 17, 1963 to Sherwood R. and Kathryn (Staron) Conrad at Ft. Benning Army Hospital in Columbus, Georgia. John was a graduate of Everett High School and the meat-cutting program at Southwest Technical Institute in Fennimore, Wisconsin. He married his wife of 30 years, Debbie Daugherty, on May 26, 1990 in Canton, Michigan. They were blessed with a son, John, and a daughter, Chelsey, along with Debbie's daughters, Sheri and Kristy. John was a conscientious, hard worker and excelled in his occupation as a Journeyman meat-cutter. He worked the majority of his career, thirty-four years, for Meijer, Inc., working in Sterling Heights, Monroe, Mason, and Charlotte, assisting in the start-up of new stores. An avid outdoorsman, John thoroughly supported the management of both the environment and wildlife. A skilled hunter, with the bow and arrow as well as with firearms, John took great pleasure in his "deer camp," where he hosted both family and friends. His other sources of enjoyment were fishing, beekeeping, vacationing at Munro Lake with Grandpa and Grandma Mangler, and sitting on his back porch overlooking the pond and bird feeder. A man with a strong faith, John used the last days of his life to show his love and appreciation for his family. He surprised Debbie a few weeks before his passing by arranging a ceremony renewing their wedding vows. He also arranged the baptism of his and Debbie's grandchildren, Hunter, Adalynn, and Hazel. His brother, Jim, officiated at both ceremonies. Family and friends shared in their celebrations. John was preceded in death by his grandparents, Fred and Agnes (Ondra-Staron) Mangler and Sherwood F. and Helen (Farr) Conrad. He is survived by his wife, Debbie; son, John Conrad; daughters, Chelsey (Ashton) Wood, Sheri (David) Collins, Kristy (Martin) Wilmath; grandchildren, Hunter, Adalynn, and Hazel Wood, Cody and Meghan; great-grandchildren, Rylee, Beau and Blakely Wilmath; his parents; brother, Jim (Helen) Conrad; and many nieces and nephews. A memorial service will be held Saturday, August 29, 2020, 1:00 PM at First Lutheran Church in Charlotte. Masks and social distancing will be observed. Memorial contributions may be made to the American Cancer Society. Friends and family are encouraged to share memories of John on his tribute page at www.PrayFuneral.com The family is in the care of Pray Funeral Home, Charlotte. John's family wishes to thank the many friends and family who brought food, sent cards, and visited John during his illness. A special thanks to Hospice caretakers Ranea and Niccole for their compassionate, patient care.

John J. Conrad of Charlotte, age 57, passed away surrounded by his family and friends on Thursday, August 13, 2020 after a short illness. He was born on April 17, 1963 to Sherwood R. and Kathryn (Staron) Conrad at Ft. Benning Army Hospital... View Obituary & Service Information

The family of John Joseph Conrad created this Life Tributes page to make it easy to share your memories.

John J. Conrad of Charlotte, age 57, passed away surrounded by...

Send flowers to the Conrad family.