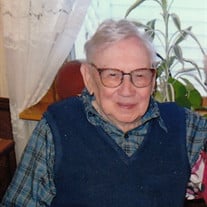 John Frank Hokanson ,95, a man who grew up in the days when a handshake was all that was needed for making agreement, passed away on November 1, 2019 in Charlotte. He was born on April 14, 1924 to John Frank and Daisy (Haroon) Hokanson II in Vermontville, MI. John lived his life with the philosophy of treating others as he would like to be treated; was always honest with people and expected honesty from others. John was employed by Prescott Motor Sales in Vermontville, which furthered his knowledge, love and ability to monkey with small engines. He was employed at Charlotte Auto Parts, then at A.E. for over 25 years, and continued doing small engine repairs once he retired. He and his beloved wife, Veda, loved to spend time at their family cottage at Horsehead Lake and then in later years, in North Carolina. He had a green thumb for gardening and enjoyed fishing. He was very proud of the fact that he still had his driver's license and was active driving around town. His love for his favorite grandson was very evident (he had only one), and he treasured each of his granddaughters. John is survived by his sons, Michael (Janet) Hokanson; Charles (Patty) Hokanson; grandchildren, Travis Hokanson, Kim Hokanson-Marr, Shannon Hokanson-Rondon, Charlotte Hokanson-Gulier, Annie Garwood; 16 great-grandchildren. He was preceded in death by his wife, Veda; brother-in-law, Stanley C Burt; son, Stan Hokanson, and his parents. Friends are encouraged to support John's family at visitation and funeral services. Funeral services will be held on Tuesday, November 5, 2019 at 2:00 p.m. at Pray Funeral Home in Charlotte with Pastor Charles Jenson officiating. Interment will follow at Woodlawn Cemetery. Visitation will be held on Tuesday, November 5, prior to the service from 12-2:00 p.m. If desired, the family suggests memorial contributions to Great Lakes Hospice. Friends and family are encouraged to share memories of John on his Tribute Page at www.PrayFuneral.com. The family is in the care of Pray Funeral Home, Charlotte.

John Frank Hokanson ,95, a man who grew up in the days when a handshake was all that was needed for making agreement, passed away on November 1, 2019 in Charlotte. He was born on April 14, 1924 to John Frank and Daisy (Haroon) Hokanson II in... View Obituary & Service Information

The family of John Frank Hokanson created this Life Tributes page to make it easy to share your memories.

Send flowers to the Hokanson family.