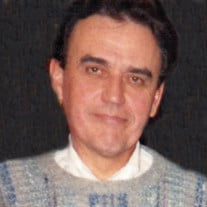 John Douglas Martis III, 83, of Potterville, died peacefully on Thursday, April 4, 2019 in Charlotte. John was born on March 16, 1936, in St. Johns, MI, the son of John Douglas and Ann (Durkovic) Martis, Jr. He graduated from Olivet High School in 1953 before going to work in various capacities. In his early days, he drove truck for Schafer's Bakery and worked construction. He eventually entered into car sales, working at many notable Oldsmobile Dealerships in the Lansing area, Albion Ford, and eventually founding Martis Auto Sales in Lansing. In 1983, he purchased Martin Jeep Eagle with two locations in Charlotte, which he owned and operated until his retirement. He is a 50 year member of the Potterville Masonic Lodge, and was well known throughout the community. Throughout the years, John owned several sulkie racing horses and enjoyed traveling the state to various races. Many will remember his sponsorship of Charlotte's Frontier Days. He enjoyed time spent with his children riding snowmobiles around the house and boating with the family at the lake. John was a big time Casino guy, and loved gambling trips with friends. Above all, John loved his family. He is survived by his children, Scott (Cathleen Johnson) Martis, Shari (Craig) Engle, Sandi Martis, and Shannon Martis; grandchildren, Jena and Jodi Martis, Richard Whitbeck, Dartanion (Sandra) Thomas; great-grandchildren, Audrey and Braylon Whitbeck, and Treaden Gallert; step-granddaughter, Avery Engle; sisters, Dorothy (James) Wirt and Betty (Jim) Dent; and several nieces and nephews. He was predeceased by his wife of 39 years, Daune Martis; sister, Irene Coats; and his parents. Friends are encouraged to support John's family. Funeral services will be at 2:30 p.m. on Tuesday, April 9, 2019 at Pray Funeral Home in Charlotte with Pastor Michael Bater officiating. Visitation is from 12:30 - 2:30 p.m. on Tuesday, just prior to the service. Interment will follow at Benton Twp. Cemetery. If desired, the family suggests memorial contributions to Eaton County Humane Society or the Masonic Lodge #367. Friends and family are encouraged to share memories of John's on his Tribute Page at www.PrayFuneral.com. The family is in the care of Pray Funeral Home, Charlotte.

The family of John Douglas Martis III created this Life Tributes page to make it easy to share your memories.

Send flowers to the Martis family.