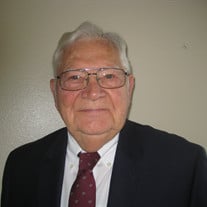 John David O'Bryant, 93, of Grand Rapids, formerly of Charlotte, died peacefully on Tuesday, October 19, 2021. John was born November 26, 1927 in St. Louis, MI, the son of Edward and Rhoda (Sanders) O'Bryant. He graduated from Perry High School in 1946 before enlisting in the U.S. Army and proudly serving in Japan at the close of WWII. Upon his return, he married the love of his life, Ruth Wilma Jansen, on September 24, 1949 in Haslett, MI. Early on in their marriage, John and Ruth bought a farm in Charlotte, where they moved to raise their family. Farming remained an integral passion in John's life. He went to work as the Coordinator of County Fairs for the State of Michigan Department of Agriculture, a position he held for 25 years until his retirement in 1988. He also served on the board of the Michigan Association of Fairs and was inducted into the Hall of Fame of the International Association of Fairs and Expositions. He and Ruth also loved to travel, especially to fairs across the state and beyond. They were devoted members of First Baptist Church in Charlotte, and kept Faith central to their marriage and their community. John is survived by his loving wife of 72 years, Ruth; their son, Robert (Angie) O'Bryant; granddaughters, Robin (Robert) Koziol and Andrea (Christopher) Alberts; great-grandchildren, Robert and Johnny Koziol; and brothers, Edward and Daniel O'Bryant; and many nieces and nephews. He was predeceased by his son, David O'Bryant; and his siblings, James O'Bryant, William O'Bryant, Kenneth O'Bryant, Iva Mae Theron, and Uvah Wright. Friends and family are encouraged to support John's family by attending services or sharing memories on his tribute page at www.prayfuneral.com. Funeral services will be at 2:00 p.m. on Saturday, October 23, 2021 at First Baptist Church in Charlotte. Visitation will be from 12:00 - 2:00 p.m., just prior to the service on Saturday. Interment will take place at Ft. Custer National Cemetery. The funeral will be webcast so you may watch it from any computer, smartphone, or mobile device that has internet access. Go to www.prayfuneral.com, click on John's tribute, then click on Photos and Videos from your computer (or Media from your smart phone). If desired the family suggests memorial contributions to First Baptist Church of Charlotte or Honor Flight. The family is in the care of Pray Funeral Home.

The family of John David O'Bryant created this Life Tributes page to make it easy to share your memories.

Send flowers to the O'Bryant family.