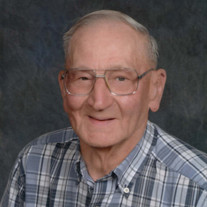 John Arthur Simpson, 90, died peacefully on Monday, September 20, 2021 at his home in Charlotte surrounded by family. John was born February 1, 1931 in Roxand Twp., MI, the son of Kenneth and Eathel (Boyer) Simpson. He graduated from Charlotte High School in 1950, and married Phyllis Barney on August 29, 1954 at Gresham United Methodist Church. John devoted his life to family, his community, and farming. John and Phyllis loved their farm, where they lived since 1963. They raised three children there, and it has been a beloved home for their children, grandchildren, and great-grandchildren who visited as often as they could for fish fries, hunting, or ice cream. John regularly attended and faithfully supported the church where he and Phyllis were married. He was a hardworking, honest, and generous man who set an example of lifelong love and respect for his family and all who knew him. John started farming in 1950, working the land for 68 years, before finally retiring in 2018. It was a source of pride that his son, Wayne, farmed with him for the last several years. In addition to farming, he and Phyllis built a good business selling Pioneer Seeds for 40 years. With his father, and later his son, John spent over 25 years building bean headers for harvesting navy beans. He also worked he at Fascut Tools from 1955 to 1961. The couple were well-known in the community for their contributions. John served in volunteer capacities, including 5 years as a 4-H leader, 10 years on the Chester Township Board of Review, 21 years on the Eaton County Soil Conservation Board of which he served as Secretary, the Farm Service Agency Board. He was a member of Farm Bureau since 1950 and volunteered for many projects and activities with that organization. Together, John and Phyllis were inducted into the Michigan Farmers Hall of Fame in 2002. John received many other awards and recognitions along the way, including Conservationist of the Year from the Thornapple Grand Soil Conservation District, and the Distinguished Service to Agriculture Award from Eaton County Farm Bureau. When not on the farm, Phyllis and John loved to travel - often on farm tours or with friends - and they were proud to say that they had been to all 50 states. They traveled together, with their kids and grandkids, taking each of the grandkids to Disney World. John enjoyed fishing and hunting, especially a week or two of deer camp with brothers and friends every year. John is survived by his three children, Marilyn (Stanley) Marshall, Wayne (Sandy) Simpson, Diane Enterline; grandchildren, Angel Andrews, Kathleen Marshall, Samantha (Lam Pham) Marshall, Josh (Lindsay) Simpson, Jason Ross, Josh Ross, and Jeff Ross; great-grandchildren, Kalli (Matt) Mongar, Kadence Andrews, James Pham; great-great-granddaughter, Aubree Mongar; siblings, Marvel Weers, Max (Sandy) Simpson, Lois (Ken) Klumpp, Albert (Jaynne) Simpson, and Roy (Krys) Simpson; siblings-in-law, Louise (Richard) Todd, Leonard (Bonnie) Barney. He was predeceased by his wife of nearly 64 years, Phyllis Jean Simpson; beloved grandson, Clifford Marshall; son-in-law, Sheldon Enterline; and brother-in-law, Clifford LaMarr Weers. The funeral service will be held outdoors in the Pray Funeral Home Gardens on Friday, September 24, 1:00 PM with Pastor Bryce Feighner officiating. Visitation will be Thursday, September 23, 2-4 PM and 6-8 PM inside at Pray Funeral Home. Interment will take place in Gresham Cemetery alongside Phyllis. In lieu of flowers, the family asks memorial contributions may be made to Hospice of Lansing, Charlotte FFA, or Eaton County 4-H. Friends and family are encouraged to share memories of John on his tribute page at www.PrayFuneral.com. The family is in the care of Pray Funeral Home.

John Arthur Simpson, 90, died peacefully on Monday, September 20, 2021 at his home in Charlotte surrounded by family. John was born February 1, 1931 in Roxand Twp., MI, the son of Kenneth and Eathel (Boyer) Simpson. He graduated from Charlotte... View Obituary & Service Information

The family of John Arthur Simpson created this Life Tributes page to make it easy to share your memories.

Send flowers to the Simpson family.