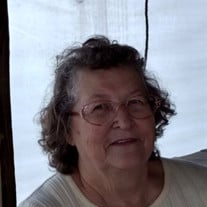 Judith Kay Osenbaugh, a great example of what it means to "Be a Good Person," passed away on April 9, 2020 at her residence in Charlotte at the age of 77. She was born on March 4, 1943 to Robert and June (Burdick) Pratt in Lansing, MI. Her family moved to Manton in northern Michigan where she grew up and attended Tustin High School. In April of 1959 she met a young man, Cecil Osenbaugh on a blind date at a Donkey Basketball game. One year later they were married on April 23, 1960. Working as a seamstress, Judy was at Charlotte Chair Company and later at Marlene's Bridal in Charlotte. She used her skills at home crocheting many items, most notably crocheting delicate and beautiful covers on Christmas glass ornaments. She crocheted several covered bulbs for her nurse and caregivers during her final illness. Judy also loved playing bingo over the years, most recently at the Charlotte Senior Center. In the spring you could find her planting flowers around her home which was filled with her massive doll collection and a unique collection of beer steins. Judy had a love for travel. Her children remember many trips to the Western United States during the summers, and her husband says they had traveled through 39 states on those trips. As they grew older they still traveled, with one memorable trip to Alaska for a month with two of their grandchildren. Another memorable trip on their 25th anniversary to Hawaii resulted in many annual return trips to the Aloha state. At home Judy loved to read and spend time with the couple's children and grandchildren. Above all else, family and friends will remember Judy as a strong woman with a big heart. She was a kind and compassionate wife, mother, grandmother, great-grandmother and great-great-grandmother. She opened her home to immediate family, distant family, "adopted family" and anyone who needed to be "taken under her wing." She was truly "Mom" to many. Judy is survived by her husband, Cecil; daughter, Judy Elaine (Edward Jr) Trailer; four sons, Robert Wayne (Robin) Osenbaugh, Frank Sherman (Tammy) Osenbaugh, Harry LaVille (Jeanette) Osenbaugh, Cecil Harold Osenbaugh, Jr.; 22 grandchildren, 25 great-grandchildren;1 great-great-grandchild; 2 sisters, Roberta Taylor and Beatrice Burnham; and four brothers, Lloyd Pratt, Kurt Hanford, Michael O'Donnell, and Patrick O'Donnell. Due to current quarantine and sheltering guidelines, a memorial service will take place at Pray Funeral Home when Michigan's shelter-at-home restrictions are lifted. Friends and extended family members are encouraged to view Judy's Family Album Tribute video and share remembrances and condolences online in Judy's Tribute Page at www.PrayFuneral.com. If desired, the family suggests memorials to the American Cancer Society, or Sparrow Hospice. The family is in the care of Pray Funeral Home, Charlotte, MI.

Judith Kay Osenbaugh, a great example of what it means to "Be a Good Person," passed away on April 9, 2020 at her residence in Charlotte at the age of 77. She was born on March 4, 1943 to Robert and June (Burdick) Pratt in Lansing, MI. Her... View Obituary & Service Information

The family of Judith Kay Osenbaugh created this Life Tributes page to make it easy to share your memories.

Judith Kay Osenbaugh, a great example of what it means to &quot;Be...

Send flowers to the Osenbaugh family.