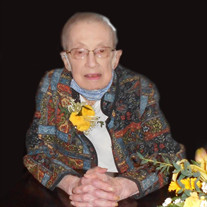 Kathryn "Kay" Stien Cunningham of Charlotte, passed away on June 20, 2021. Kay, who was born May 4, 1931 in Dover, Ohio to Maurice and Josephine (Rinderknecht) Stien, was known as a vibrant, outgoing and loving wife, mother, grandmother and community servant. Kay graduated high school in 1949 and went on to earn her B.S. in Education in 1953 from Ohio State University, where she met her life-long love, John M. "Jack" Cunningham, whom she married on September 15, 1956. During her time at OSU, Kay volunteered as the Treasurer for her Delta Zeta Sorority. After graduation Kay continued on as a life member of the OSU Alumni and fan of the OSU Marching Band. Together, Jack and Kay raised a daughter, Jane Ellen, and a son, Richard Thomas. Kay had the opportunity to serve her local communities in a variety of roles throughout her life. She was very involved with the Girl Scouts as a leader, chairperson of several boards, while earning awards such as the Thanks Badge and the Thanks Badge II. Kay served on the local Homewood Library Board of Trustees for 20 years. She also served as PTA president and held various offices for the Homewood Women's Club, Newcomers Club, and Friends of the Library. In 1974 she earned the California Congress of Parents and Teachers Honorary Service Award. Mrs. Cunningham was preceded in death by her husband Jack in 2016, whom she lovingly cared for until he passed away. She is survived by her daughter, Jane Ellen (David) Johnson, and her son, Richard Thomas Cunningham; four granddaughters, Elaine, Eileen, Brenna and Hillary; one grandson, Evan; and great-granddaughter Katherine. Kay is predeceased by her parents. Friends are encouraged to support Kay's family by attending services or sharing memories on her Tribute Page at www.prayfuneral.com. Visitation is on Thursday, June 24, 2021, from 10:00 a.m. - 12:30 p.m. at Pray Funeral Home. A private internment will take place on Thursday, June 24, 2021, at Fort Custer National Cemetery. If desired, the family suggests memorial contributions to the Girl Scouts of America. The family is in the care of Pray Funeral Home, Charlotte.

Kathryn "Kay" Stien Cunningham of Charlotte, passed away on June 20, 2021. Kay, who was born May 4, 1931 in Dover, Ohio to Maurice and Josephine (Rinderknecht) Stien, was known as a vibrant, outgoing and loving wife, mother, grandmother and... View Obituary & Service Information

The family of Kathryn "Kay" Stien Cunningham created this Life Tributes page to make it easy to share your memories.

Kathryn &quot;Kay&quot; Stien Cunningham of Charlotte, passed away on June...

Send flowers to the Cunningham family.