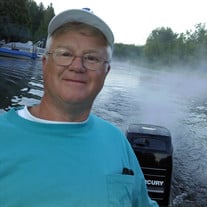 Keith Allen MacKenzie, 75 of Vermontville, a man of integrity, faith in God, and love for his family, died April 7, 2022 at his home. Born on Halloween Day 1946 in Lansing, MI to Donald and Marion “Arvilla” (Peltier) MacKenzie, Keith always wondered if he was a trick or a treat. He once asked his mom, and she laughed so hard but never did give him a straight answer. However, his family all knew he was a treat. Keith was the 3rd of five children, and the only one of his siblings with a name that didn’t start with the letter D. Apparently his name was supposed to be Dennis Allen MacKenzie, but when the nurse pointed out what the initials spelled, his mom promptly decided his name would be Keith. Growing up on a farm, Keith learned about hard work and ways to be industrious. His first job, while he was still in high school, was helping to build homes. There were many skills he learned that Keith used his entire life, helping to build many houses, working on electrical, plumbing, roofing and other issues for friends and family. Keith was never too busy to help the people he cared about…except maybe during deer hunting season. He started working at Oldsmobile (later GM) and worked there for 35 years before retiring as a Quality Inspector. After retirement from GM he worked for Miars Electric and Swanson Electric for several years, working on projects such as the Eaton County Youth Facility, Meijer in Charlotte and Bay City, and AL!VE community center in Charlotte, working circles around the younger men. Keith met his high-school sweetheart and future wife, Kay Huber, one day while walking down the street with a friend. He saw her across the street tried to whistle but couldn’t, so his friend whistled for him (something we would never get away with today), and once they started talking fell in love. They married one year after high school graduation and have been together for 56 years, supporting each other through everything, including cancer diagnosis for both of them in 2021. The biggest pride of his life was his children and grandchildren, he loved every chance he got to work with them, and teach them. Together Keith and his son did most of the work building Kirk’s dream home, and years later built a barn bigger than many people’s homes. When his daughter decided to tile a bathroom, Keith was there to help guide her every step of the way, and did all the cutting of the tile while Kristine laid every piece. They enjoyed it so much they later did the tile in Kristine’s bathroom at home as well. In the year 2020 when COVID closed everything down, Keith and Kirk worked together to accomplish many great things. They cut and stacked cords and cords of wood to keep their house warm in the winter, they built a garage and breezeway at Keith and Kay’s home so it would be easier for Kay to get to the car with her walker, and they constructed very elaborate hunting blinds that would make most deer hunters envious. Love of family and faith in God were always the center of Keith’s world. Vacations always included family. There were annual fishing trips to northern Michigan or Canada in summers, deer camp at Baldwin in the fall for many years, bear hunting in the U.P., turkey hunting, and snowmobiling trips in the winter with lots of friends and family involved in every adventure. There were always big fish to be caught, but somehow Keith rarely caught them, it was always the kids when he would ask them to “hold” his fishing pole for a moment. There was a giant fish story in Canada though, and this one didn’t get away. There is picture proof of this massive pike that pulled a canoe with three men around the lake until Keith successfully landed it. Keith is survived by his wife of 56 years, Kay; daughter, Kristine (Daniel) Sowles; son, Kirk MacKenzie; grandchildren, Carson (Amanda Webster) Ames, Jennelle Mackenzie Petras, Megan (Sam) Jordan, and Amanda (Mark) Wallis; bonus granddaughter, Macy (Devon) Wood; great-grandchildren, Logan Ames, Mackenzie Petras, and Myah Wallis; brothers, Don MacKenzie, Doug (Judy)MacKenzie, and Den (Bonnie) MacKenzie; sister, Denice (Joe) Morgan; brothers-in-law, Jay Huber, John Huber, and Rick Churchill; sisters-in-law, Loretta (Jim) Holm, Valera (Mike) Lewis, and Lori (Mike) Rogers; and many beloved nieces and nephews. He was preceded in death by his parents, Don and Arvilla MacKenzie; sisters-in-law, Rev. Evelyn Huber and Marilyn MacKenzie; and nephews, Mike MacKenzie and Brian MacKenzie. Friends and family are invited to celebrate a life well lived by joining them at visitation and funeral services. Visitation is April 13, from 2-4:00 p.m. and 6-8:00 p.m. at Pray Funeral Home in Charlotte, MI. Funeral Services are Thursday, April 14, at 2:00 p.m. at the South Cochran Church of God in Charlotte with Pastor Michael Rysko officiating. The funeral will be webcast on his tribute page at www.PrayFuneral.com, click on Keith’s tribute, then click on Photos and Videos from your computer (or Media from your smart phone), and there will be a link for webcasting on this page. The family suggests memorial contributions to South Cochran Church of God, or Sparrow Herbert-Herman Cancer Center. Everyone is invited to share memories of Keith on his tribute page at www.PrayFuneral.com. The family is in the care of Pray Funeral Home.

The family of Keith Allen MacKenzie created this Life Tributes page to make it easy to share your memories.

Keith Allen MacKenzie, 75 of Vermontville, a man of integrity,...

Send flowers to the MacKenzie family.