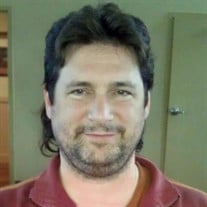 Kevin Sebastian Rapelje, 57, of Charlotte, MI, passed away suddenly on December 4th, 2021 at his home. He was born February 5, 1964 in Lansing, MI to Michael Rapelje and Trudy (Brown) Sicotte. Kevin graduated from Eben High School in the Upper Peninsula with the class of 1982. He worked in the Pharmacy at Marquette General Hospital for 15 years and attended Northern Michigan University where he graduated in 1998. He also received his MBA from University of Michigan Flint in 2009. On August 5, 2005 he married Melinda Jones and on May 21, 2007 they welcomed their daughter, Sophia Rapelje, into the world. They were the loves of his life. Kevin was a loving, faithful husband and a wonderful father. He often lovingly referred to Melinda and Sophia to others as “my girls”. He enjoyed camping, fishing, reading, music, movies, wine, cooking, and writing children’s story books, watching college football and spending time at the horse barn with Sophia and Melinda. He had a kind, forgiving heart and as the oldest of 5 children he took the role of protecting, nurturing and comforting others who may be struggling throughout his life. Kevin is survived by his wife, Melinda and daughter, Sophia; his parents, Michael Rapelje of Kincheloe, MI and Trudy (David) Sicotte of Peyton, CO; 2 brothers, Kerry (Lyn) Rapelje of Calhan, CO and Matthew Rapelje of McGrath, Alaska; 2 sisters, Diana Doyle of Rolla, KS and Bridget (Tim) Ball of Manistee, MI. He is also survived by numerous cousins, nieces and nephews that he was very close with. Friends and family are encouraged to support Kevin’s family by attending services or sharing memories on his tribute page at www.prayfuneral.com. A Memorial Service will be held at Journey Life Church South Campus in Mason on Saturday, December 11 at 1:30 p.m. Visitation will be held beginning at 12:30 p.m. Kevin loved his jeans, please come casual. The service is going to be streamed via zoom: https://us02web.zoom.us/j/3255076650?pwd=alM0bEZ3UlYwYit1UFBUTEVyZGFvZz09, Meeting ID: 325 507 6650 Passcode: 053333. Memorial contributions are suggested to Sophia’s Education Fund, with checks payable to Melinda Rapelje. The family is in the care of Pray Funeral Home.

Kevin Sebastian Rapelje, 57, of Charlotte, MI, passed away suddenly on December 4th, 2021 at his home. He was born February 5, 1964 in Lansing, MI to Michael Rapelje and Trudy (Brown) Sicotte. Kevin graduated from Eben High School in the Upper... View Obituary & Service Information

The family of Kevin Rapelje created this Life Tributes page to make it easy to share your memories.

Send flowers to the Rapelje family.