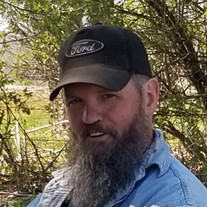 Lance Bryan Brumm, 51, of Vermontville, a man known for his wit, skills with his hands, and his love for his family, died Tuesday, May 11, 2021 in Charlotte. Lance was born September 28, 1969, in Charlotte, the son of Chris LeRoy and Penny Jean (Barlond) Brumm. He graduated from Maple Valley High School in 1988, and was a member of the wrestling team. After school, he went to work at Ray Grant's Woodshop before moving to Sturgis, MI, where he worked at the Kirsch Company, and enjoyed the birth of his son, Lucas. Lance moved back to Vermontville shortly after and started his career with Spartan Motors as an Electrical Technician, where he worked over 30 years. On the job and at home, Lance could be counted on for his expertise to fix and repair anything and everything. Throughout his life, he enjoyed trips up North to Barbeau, MI, where many family memories were made alongside the St. Mary's River. He also loved riding Harley motorcycles and dirt bikes, especially with his son. Lance was also known for his quick wit, and complete devotion to his family and many close friends. Even while enduring great pain in his last year of life, Lance continued to provide strength and support for others. Lance treated everyone with equality and compassion, and will be forever remembered for strength of character, and for being the best dad a child could ask for. Lance is survived by his wife, Tina Brumm; sons, Lucas (Kyahsondra) Brumm and Braydon White; grandsons, Jayce and Gunner Brumm; parents, Chris and Penny Brumm; brother, Lane (Laurie) Brumm; sisters, Lacey (Chad) Johnson and Lanette (Jim Skelton) Conger; nieces and nephews; and his best friend, "Homie." He was predeceased by his grandparents, Richard and Shirley Brumm, and Ray and Barbara Barlond; and his cousin, Michael Dennis. An upcoming private family gathering will take place. Friends and family are encouraged to share memories of Lance on his Tribute Page at www.PrayFuneral.com. Memorial donations may be made to the family in the care of Tina Brumm. The family is in the care of Pray Funeral Home, Charlotte.

Lance Bryan Brumm, 51, of Vermontville, a man known for his wit, skills with his hands, and his love for his family, died Tuesday, May 11, 2021 in Charlotte. Lance was born September 28, 1969, in Charlotte, the son of Chris LeRoy and Penny... View Obituary & Service Information

The family of Lance Bryan Brumm created this Life Tributes page to make it easy to share your memories.

Lance Bryan Brumm, 51, of Vermontville, a man known for his wit,...

Send flowers to the Brumm family.