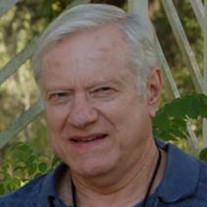 Larry Gordon Backus Mar 21, 1937 - Nov 3, 2020 Surrounded by his family beloved father, Grandfather and Great Grandfather, Larry Gordon Backus passed away on Tuesday, November 3, 2020 in Webster, Texas at the age of 83. He was born March 21, 1937 to Clare L. and May M. Backus of Potterville, MI, where he grew up on the family farm. "Chief", as he was known to his home-town friends, was co-valedictorian of his Potterville high school graduating class and remained an active alumnus, connecting graduates and teachers over many years. Although he originally planned to manage the family farm, after he married Shirley A. Heinze and started a family, he decided to change the course of his future by completing a bachelor's degree in Electrical Engineering at Michigan State University while working two jobs to support his family. His desire to be part of the space program took him to Titusville, Florida then to the Houston area, where he resided for over 50 years. He was passionate about the U.S. Space Program and contributed to human space programs including Apollo, Skylab, Space Shuttle and Space Station, working for Mc Donald Douglas, Link Flight Simulation and successive companies for 40 years in training and simulation. He also served as the project manager to develop the software for a training simulator for the U.S. Airforce B-52 aircraft while earning his MBA from the University of Houston Clear Lake. As a father, grandfather and great-grandfather, he left a strong legacy and inspiration in the importance of education and strong work ethic. He always remained a devoted provider and supporter of his family. He was preceded in death by his parents; four brothers Wayne Backus, Richard Backus, Caryl Backus and Neil Backus; and granddaughter Ruby Backus. He is survived by his children Linda Retherford and husband David, James Backus and wife Nikki, David Backus and wife Christina, and Lisa Backus; 19 grandchildren and 16 great-grandchildren. A private family service was held at Crowder Funeral Home in Webster Texas on November 14. A graveside service will be conducted Friday June 11, 11:00 AM at Benton Township Cemetery in Potterville MIchigan. In lieu of flowers, please consider memorial donations to the American Heart Association, Multiple Sclerosis (MS) Foundation, the Cure and Action for Tay-Sachs and Sandhoff (CATS) Foundation and the Mixed Connective Tissue Disease (MCTD) Foundation.

The family of Larry Gordon Backus created this Life Tributes page to make it easy to share your memories.

Send flowers to the Backus family.