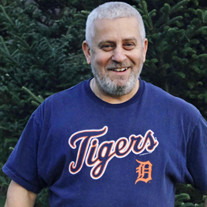 Laurence "Larry" Warren Hart, a devoted and loving, husband, father, son, and brother, died unexpectedly on Saturday, October 24, 2020. Larry, 58, of Onondaga was born September, 25, 1962, in Lansing, MI, the son of Jackie "Jack" Hart and Sue Ann (Jean) Brownfield. Larry moved to Atlanta, Georgia where he worked many jobs. Larry would later move back to Michigan to join the Army. He completed his GED and enlisted. Larry devoted his life to serving his country. He was dedicated and excelled in making different ranks. Larry served during Operation Iraqi Freedom. He served in multiple roles during his time in the military, from being an instructor of the Patriot Missile, Air Defense Specialist, Master Gunner and a Recruiting Officer. In 2009 Larry retired from the United States Army and National Guard after proudly serving 22 years. On August 30, 2008, Larry married Jenny Klingshirn. The couple met while working together at the Collins Road Post Office in Lansing, MI. He adored his family. Spending time with his kids meant the world to Larry. The family loved taking camping trips throughout Michigan. His hobbies include, hunting, shooting guns, playing fantasy football, indulging in history, talking about politics and A LOT of talking! Larry was not only devoted to his country and family, but most importantly with his relationship with the Lord. He will be remembered for his tremendous love that he had for his family. Larry is survived by his wife, Jenny; children, Iaian Hart, André Hart, Gunnar Hart, Archar Hart; mother, Sue Ann Brownfield; father, Jack (June) Hart; sister, Debra Hart; step-brother, Tony Macchia; mother-in-law, Jane Klingshirn; sisters-in-law, Kristy (Steve) Shepard, and Marcy Klingshirn; and his nieces and nephews. He was predeceased by his grandparents, Roy and Amber Hart, and Laurence and Fern Jean; father-in-law, Donald Klingshirn. Funeral services are Monday, November 2, 2020 at 11:00 a.m. at St. Mary Catholic Church in Charlotte with Rev. Fr. Dwight Ezop officiating. Visitation will be at Pray Funeral Home on Sunday, November 1, 2020 from 2-4:00 p.m. and 6-8:00 p.m. with a Rosary being prayed at 7:00 p.m. Mask, group capacity, and distancing guidelines will be practiced. The funeral will be webcast so you may watch it from any computer, smartphone, or mobile device that has internet access. Go to www.prayfuneral.com, click on Larry's tribute, then click on Photos and Videos from your computer (or Media from your smart phone). Just prior to the beginning of the service, a link will appear on this page to watch the webcast. If desired, the family suggests memorial contributions to The Family for his children's college fund. Friends and family are encouraged to share memories of Larry on hisTribute Page at www.PrayFuneral.com. The family is in the care of Pray Funeral Home, Charlotte.

The family of Laurence 'Larry' Warren Hart created this Life Tributes page to make it easy to share your memories.

Send flowers to the Hart family.