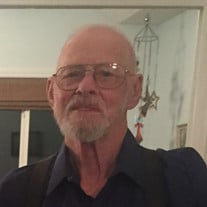 Lawrence Stoyan Green Sr. of Charlotte, a hardworking, fun-loving man of many interests passed away on June 27, 2021. Lawrence was born in Lansing to William and Katherine (LeBlanc) Green. Much of his childhood was in Holt, Michigan. After marrying the love of his life, he and Jerralee moved to Charlotte and lived above the Shopping Guide downtown and then moved to Potterville. Never missing a day of work at Fisher Body was quite an accomplishment for 36 years of employment where he began working on the line and retired as an inspector. Even during his retirement Lawrence always stayed busy. His life interests included motorcycles and muscle cars. He traveled the tri-state area with his best friend and father-in-law, Waldo Sweezy. In Larry’s younger years he could be found tinkering with his favorite muscle car, the 1966 GTO in the garage, or drag racing it at Onondaga Speedway. Larry enjoyed watching NASCAR, the Chicago Bears, drag racing, and Michigan vs. Michigan State games with all the rivalry. In his later years he enjoyed John Wayne westerns, completing crossword puzzles and complaining about politics. Lawrence took joy in a good argument. Most political discussions included the phrase “Our country is going to hell in a hand basket.” He found ways to encourage family and friends with his humor. Larry was just as happy watching family members play a game of euchre as well as playing it himself. No matter what was on the menu Larry would often come up with his favorite meal ¼ lb. cheeseburger, french fries, and a vanilla shake. After his wife Jerralee died, Larry adopted four cats: Smoke, Patches, Tutu, and Callie. The family dog, Odin, was also a favorite of Larry’s. While Larry was confined to a chair he would toss a ball for Odin to chase down until he wore Odin out and fell asleep at Larry’s feet. Above all, Larry cherished his time with his family. He usually had a big smile on his face at fun holiday gatherings and family reunions with all the little kids running around. A favorite recent memory is Larry taking the grandkids to a drive-in movie last summer. Larry is survived by his son, Lawrence (Paula) Green, Jr. of Charlotte, MI; daughter, Tracie Ellison of Parma, MI; 10 grandchildren, numerous great-grandchildren; and 1 great-great-grandchild; sisters, Nancy (George) Dunivon, Deborah Green; and brothers, Robert (Susie) Green, and William (Chris) Green. He was predeceased by his wife, Jerralee Green; and brothers, Richard Green and Gerald Green. Friends are encouraged to support Lawrence’s family at his memorial service on Friday, July 2, 2021, 11:00 am at Pray Funeral Home with Joe E Pray as the Celebrant. The family will receive guests for visitation from 10:00 am to 11:00 am immediately preceding the memorial service. Friends and family are encouraged to share memories of Lawrence on his Tribute Page at www.PrayFuneral.com. The family is in the care of Pray Funeral Home, Charlotte.

Lawrence Stoyan Green Sr. of Charlotte, a hardworking, fun-loving man of many interests passed away on June 27, 2021. Lawrence was born in Lansing to William and Katherine (LeBlanc) Green. Much of his childhood was in Holt, Michigan. After... View Obituary & Service Information

The family of Lawrence Stoyan Green created this Life Tributes page to make it easy to share your memories.

Send flowers to the Green family.