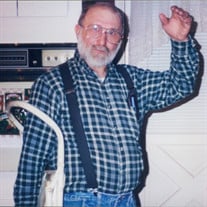 Lawrence Edward Suntken, 76, of Charlotte, a story-teller and prankster, passed away August 24, 2018. He was born June 5, 1942 to Edward and Arlene (Guy) Suntken in Lansing. Lawrence attended Sunfield High School, graduating in 1960. Lawrence married Jill Maxam in 1966, and they raised two daughters, and their legacy continued with five grandchildren, and six great-grandchildren. Lawrence worked at Owens-Illinois for 30 years. Hunting and fishing were a big part of his life, and he loved recounting stories of his adventures with his family and friends. Lawrence enjoyed watching the deer and wildlife in his yard, and evening drives with his family so they could look for deer. He loved his dog, Domino, who was the true "Ruler of the Roost." Lawrence was always thinking of others, he would pick up returnable bottles and cans, and put the proceeds in a fund to use for special purposes. The Welch Historical Museum in Sunfield also benefited from a number of things he donated to them. He also enjoyed building birdhouses, antiquing, and cutting wood (which he did until he couldn't start his gas chainsaw any longer, then he bought an electric chainsaw). After his wife Jill died in 2016, Lawrence met Kay Stuber at a support group at Eaton Community Palliative Care. When Kay tied his shoes for him, he fell for her kind ways, and she loved the way he was a gentleman-the kind who opened the door for ladies. They enjoyed dancing together at the Maple Grove Grange. Lawrence is survived by his daughters, Yvonne Visger and Felisha (Lloyd) Prickel; granddaughters, Ashley (Joshua) Sanders, Mackenzie (Adam) Foster, Alison Childers and Cassey Childers; grandson, Taylor (Samantha) Visger; great granddaughters, Brenleigh Sanders, Ava Foster, and Aubriana Childers; great-grandsons, Jensen Sanders, Easton Foster, and Mason Visger; brothers, Lavern (Marilyn) Suntken, Loyal (Glea) Suntken, and LaGrand Suntken; and girlfriend, Kay Stuber. He was preceded in death by wife, Jill Ione Suntken; grandson, A J Childers; and his parents, Edward and Arlene Suntken. Friends are encouraged to support the Suntken family at visitation and funeral services. Funeral services are Tuesday, August 28, 11:00 AM at Pray Funeral Home in Charlotte with Courtney Suntken officiating. Visitation is Sunday, August 26, 6-8:00 PM and Monday, August 27, 2-4:00 PM and 6-8:00 PM. If desired, the family suggests memorial contributions to the Welch Historical Museum in Sunfield or Eaton Community Palliative Care. Share memories of Lawrence on his Tribute Page at www.PrayFuneral.com. The family is in the care of Pray Funeral Home, Charlotte.

The family of Lawrence Edward Suntken created this Life Tributes page to make it easy to share your memories.

Lawrence Edward Suntken, 76, of Charlotte, a story-teller and...

Send flowers to the Suntken family.